FOOTBALL: RUGBY Town were back to winning ways on Boxing Day at Butlin Road, with a David Kolodynski strike and a Chris Sterling brace providing them with local derby Christmas cheer.

Having established a three goal lead within 51 minutes, there were echoes of the clash between the two sides in the FA Trophy earlier in the season as Greenbacks then threatened to claw back the deficit, but any jitters were ultimately unfounded as Rugby capably saw off the visitors’ late surge.

Valley’s starting line-up again showed a number of changes from the previous outing, with Aaron Moses-Garvey and David Kolodynski returning to fold after missing the Lincoln defeat. Gary Moran named himself at right-back and Leigh Phillips also occupied a berth on the flanks.

It was a quiet start to the game though, and aside from a couple of half chances for Bedworth’s Kieron Brehon, there was little goalmouth action of note. There were 24 minutes on the clock before the first on-target effort arrived – again from Brehon, but this was comfortably dealt with by Dan Jezeph.

The deadlock was broken three minutes later however, when Levi Rowley’s initial shot was blocked and squirted over to Phillips, who put in a powerful ball across the face of the goal which Kolodynski squeezed home. 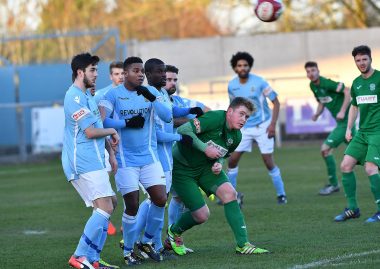 Rugby’s second came two minutes before the interval, with Mitchell Thomson this time providing the cross to the far post for Sterling to nod past Josh Barnes. Sterling also put a further strike wide ahead of the half-time whistle.

The first chance of the second period fell to United, with Jack Jeys’ curling effort from distance seeing Jezeph scramble back to try and keep it out, but fortunately the ball just missed the frame.

However it was Valley that struck again shortly after, when Sterling controlled Moses-Garvey’s lofted free-kick into the box on his chest, before then turning and firing home at the second attempt.

Inevitably the home side sat deeper to defend their three goal advantage after that, and with the resulting increased possession and territory Bedworth finally looked a threat going forward.

Luke Rowe’s low free-kick cannoned back of the base of the post, with Jezeph doing well to ultimately smother the scrambling follow-up attempts, and then a hooked effort by Elliot Parrott was also competently dealt with by the young Town keeper.

At the other end Phillips cleverly cut inside to beat his man on a couple of occasions, but both times his final efforts were lacking.

The visitors pulled one back though on 75 minutes, when Daniel Creaney poked home substitute Iyeseden Christie’s ball across the goalmouth and memories turned to the game at the Oval back in October when United had struck three times in the final quarter of an hour.

However apart from an amazing strike from just within his own half by keeper Barnes which had his opposite number frantically backpedalling to tip away and a couple of shots from Creaney, which Jezeph gathered in a more comfortable manner, Town defended solidly and effectively.

In fact, Valley could even have extended the margin of victory late on as gaps began to open up in the Bedworth back-line, with Levi Rowley just failing to pick out his man after a quick break forward and then Thomson was clinically chopped down by Mark Allbrighton just as he appeared to have a clear run on goal.