RUGBY Town provided an early two-goal blast and then a clincher from man of the match Danico Johnson to defeat Coventry Sphinx 3-2 on Tuesday.

Playing in horrendous weather conditions at Butlin Road, Town edged out their near-neighbours in the United Counties League Premier South contest, courtesy of a Louis Guest own goal, an Edwin Ahenkorah penalty and Johnson’s strike just beyond the hour mark.

With Omar Recci, Barry Fitzharris and Dylan Parker back into Carl Adams’ starting 11, Valley had raced to a two-goal lead within the opening eight minutes.

The first goal came on three minutes after a decent long pass by Alex Lock had picked out Luke English on the right wing. The full-back’s cross was nearly helped home by Parker, before Guest steered the ball past his own keeper Tom Cross.

Guest was the fall guy again shortly after when he fouled Justin Marsden in the box to allow Ahenkorah to step and send his spot-kick into the bottom left hand corner.

With the wind strongly in the visitors’ favour, it was almost inevitable that chances to peg back the early deficit would come their way, and Rugby keeper Ash Bodycote was soon in the action in doing well to save Ryan Harkin’s close range effort. 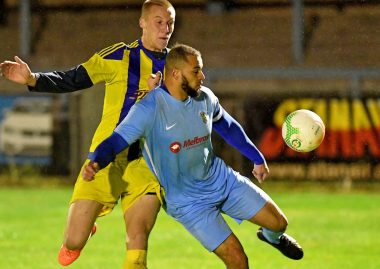 Omar Recci nearly replicated Guest’s feat when heading one just over his own goal, whilst at the other end Ahenkorah’s strike from a tight angle was kept out by Cross.

Loyiso Recci blocked another Coventry attempt on the goal-line and Bodycote did well to keep out Guest’s header as the visitors threatened.

Town regained control and Ahenkorah’s shot was blocked, Parker’s strike was also deflected the wrong side of the post and Lewis Noon denied Johnson with a goalline clearance.

Sphinx sub Jamal Adams then nearly made an instant impact, but Bodycote used his feet to good effect to scupper his chance of registering against his old club.

Rugby’s play in and around the box was better than of late, and within a few minutes their interchange play nearly saw them break through with both Johnson and Ahenkorah both denied by Cross.

However, Coventry pulled a goal back on 59 minutes when Harvey Smith capitalised on some poor defending. 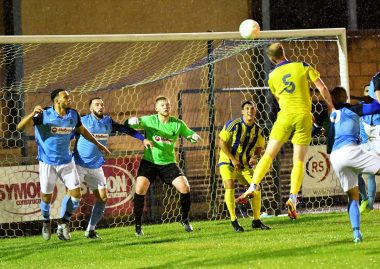 Valley’s two-goal advantage was soon restored though, when Johnson executed a calm finish to Marsden’s smart through-ball but Lawrence Rawlings scrambled home from a corner for a Sphinx goal to set up a nervy conclusion to the affair for the home fans.

Those nerves may have been saved if sub Max Johnson had converted Town’s second penalty of the game after fellow replacement David Kolodynski had been tripped in the box, but he struck the base of the post from 12 yards instead.

Rugby managed to hold on with relative comfort though, with Adams’s looping header onto the top of the crossbar the closest Sphinx came to grabbing a point.

Carl Adams’ side, who sit eighth, travel to Northampton ON Chenecks on Saturday.

Week to remember for Valley teams in league and cups