WARWICKSHIRE County Ladies won three of the six rinks to record a 129-116 victory against Oxfordshire for the third in their series of Middle England League games.

Highest winning rink went to Moira Parsons with Wendy Holloway (both Welford), Dawn Horne (RLS) and Heather Mills (Grange Ladies) who were unstoppable as they soared to a 39-5 win. 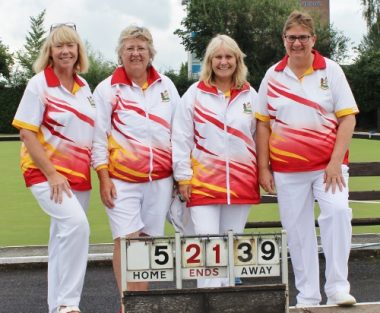 Sue Hornsby with Jayne Henfrey (both Lillington), Sharon Keal (Snitterfield) and Pat Moore (Three Spires) were evenly matched with their opponents as their game ended 17-17.

Debbie Bloxham with Linda Linney (both Stratford), Pippa Mace and Pat Gagg (both Lillington) fought back in the second half but lost 16-23.

Janice White (RLS) with Margaret Grosvenor (Lillington), Vivienne Belt (Sherwood Park) and Yvonne Bromfield (Rugby Thornfield) were up against it from the start and went down 6-31.