RUGBY Town ended a perfect October with five wins from five – but then opened November with a hugely disappointing defeat.

The Valley extended their winning run on Saturday with a 4-1 verdict at basement side Biggleswade United.

But they were very much second best on Tuesday night when Long Buckby AFC sealed a 3-1 win at Butlin Road in their United Counties League Premier Division South contest.

With Valley defenders appealing for offside, Adam Shaw put Long Buckby ahead by running through and chipping keeper Jake Woodward.

Valley’s frustration boiled over when both Dylan Parker and Loyiso Recci were sin-binned for dissent and Ryan Ansell made them pay with a close-range header for 2-0 in the second half. 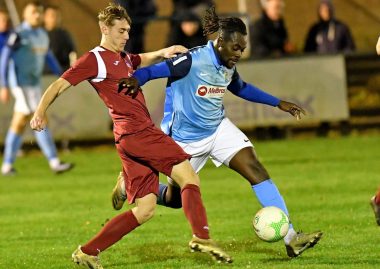 Carl Adams’ side hit back when Liam Francis’ header looped into the corner from James Hancocks’ free-kick with 15 minutes left but as they pressed for an equaliser Bailey O’Reilly finished off a breakaway for the visitors’ third. 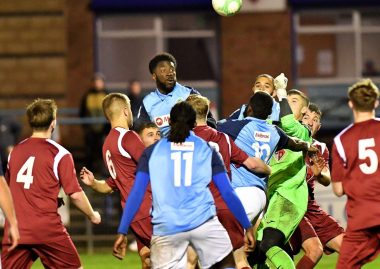 Three goals in the final 17 minutes sealed the points on Saturday at Biggleswade but a combination of wasteful finishing and stunning saves from home keeper Ollie Leslie meant it was hard work for the Valley.

Edwin Ahenkorah pounced on a defensive slip to open Rugby’s account on 34 minutes but Taylor Rhinney levelled from the penalty spot on 61 minutes after Keenah Rosser was penalised.

Parity only last 12 minutes though before Recci headed home a Luke English throw-in. Danico Johnson made it 3-1, scoring direct from a corner on 70 minutes and then doubled his tally in stoppage time from Ahenkorah’s pull-back.

Rugby, who lie eighth in the standings, will look to bounce back on Saturday when they visit Peterborough Northern Star.