Town made to pay in derby defeat 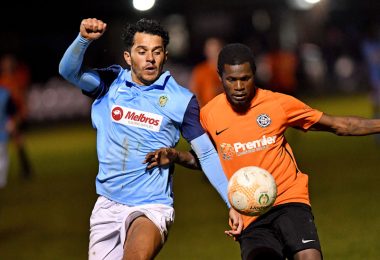 A LACK of clinical finishing proved costly for Rugby Town on Tuesday night in a 2-1 derby day defeat at Lutterworth Town.

Just days after a thumping 6-1 victory over Ellesmere Rangers gave Valley a passage into the first round of the FA Vase – setting up a trip to Dudley Sports on Saturday, October 31 – Rugby were off the pace to fall to a third   defeat this season.

Carl Adams’ side were largely unchanged, with Kurtis Revan the only new face in the starting XI, replacing the injured Danico Johnson at Dunley Way.

Despite creating a raft of chances, the visitors fell behind midway through the first half when Tendai Daire finished clinically from Marshal Keenan’s lay-off inside the penalty area.

But, when Rugby needed a route back into the game, Revan was the man to provide it and repay the faith shown in him by his manager, finishing first time after meeting Ryan Seal’s corner whipped into the near post.

While the goal restored parity early in the second half, Lutterworth went back in front late on when Abdul Rahman Sunmonu beat Sam Lomax with a low drive.

It was a cruel blow that handed bragging rights to Valley’s local rivals, who moved into third on 17 points. 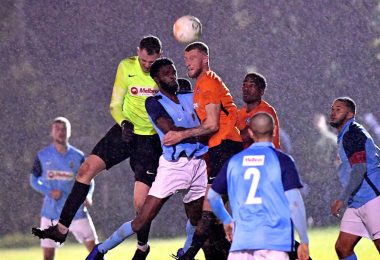 Liam Francis heads the ball away. Picture by Martin Pulley.

Perhaps the most frustrating thing for Adams is the lack of an immediate fixture for his side to put things right, with no match this weekend. Instead, Town will have to wait until Tuesday night’s home game with Quorn to provide a response.

While both sides were reduced to ten men, Town had already netted the majority of their goals by the time Ellesmere’s Jack Sweeney saw red on the hour mark – Anthony Howell also receiving his marching orders with two minutes to play after Charlie Evans completed the scoring with his hat-trick goal.

Evans rose highest to meet Ryan Seal’s pinpoint corner and plant a header past Rangers’ Liam Caines to open the scoring on nine minutes, followed by a second from Caine Elliott 15 minutes later.

While Gary Meredith reduced the arrears with a 25-yard pearler just after the half-hour mark, Evans picked out the postage stamp to restore Town’s two-goal lead two minutes before the break.

With fresh impetus to score goals, Dylan Parker added a fourth eight minutes after the interval when converting from Evans’ pass.

A red card for Sweeney added to Ellesmere’s misery with half an hour remaining after Johnson was denied from going clean through.

Substitute Howell then saw red for the home side after making a late lunging tackle deemed dangerous by the referee, while the crossbar denied Parker his third of the game following a fierce shot that looked certain to hit the back of the net.