Town look to bounce back in Quorn clash 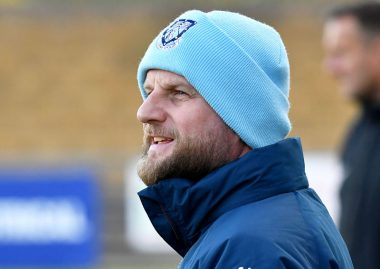 Carl Adams will have his work cut out with his midweek team selection. Picture: Martin Pulley.

A HOST of changes are expected by manager Carl Adams to his Rugby Town side on Tuesday night (7.45pm), when sixth-placed Valley take on unbeaten Quorn at Butlin Road.

In what potentially fares as the toughest examination of Town’s United Counties League Premier Division promotion credentials to date, Rugby are expected to do battle without a number of key faces in midweek.

Kurtis Revan, who replaced the injured Danico Johnson in Rugby’s last outing at Lutterworth Town, was on the scoresheet in the midweek 2-1 defeat but did not last the course of the 90 minutes – with both adding to an injury list that also includes defender Jamal Clarke.

While the Leicestershire outfit are modestly placed at present on 14 points, they remain unbeaten having only played six games so far this term with games in hand on all of the sides above them.

Taking into consideration their status as league leaders before the sudden suspension and cancelation of the 2019/20 campaign, and the size of the task becomes more clear for Rugby’s shorthanded squad.

But with the fixture coming after a long week in waiting for Adams’ side – with no match at the weekend due to original opponents’ Boston Town’s FA Vase progress – the players left available for the clash will no doubt be itching at the bit to put right their recent loss.

There is positive news elsewhere at the club though, with Rugby’s academy side one win away from a trip to Burton Albion in the FA Youth Cup.

Valley would make it a second consecutive appearance in the first round should they set up the clash with the League One club’s academy team – but will need to deal with Worcester City first in their third qualifying round away day this Friday (7.30pm).