Time for Red and Greens to deliver, says Merrick 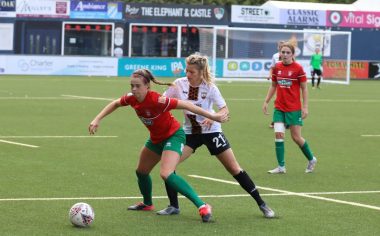 Coventry United Ladies forward Beth Merrick, left, wants her side to push on from their recent troubles. Picture: Jeff Bennett.

COVENTRY United Ladies winger Beth Merrick has targeted a winning start to December to help get her side’s season back on track.

The Red and Greens, now in their second campaign in the FA Women’s Championship, endured a tumultuous month of results in November – racking up five successive losses across all competitions and conceding 26 goals in all since their last victory over Charlton Athletic in October.

Sitting ninth in the table and taking on a London City Lionesses side just one point and one position above them on Sunday, Merrick has made a battle cry to her team-mates to seize a prime opportunity for three points.

“I’m literally buzzing to be back in with the squad,” said the 25-year-old, who returned to training on Tuesday having missed United’s last two matches against Blackburn Rovers and Sheffield United.

“We feel we can get points from Sunday’s game, which will start December off nicely.

“We have a strong squad, but the points haven’t shown it so far.”