RUGBY Town will head to Stourport Swifts in their first appearance in the FA Vase third round for 37 years.

Calr Adams’ side battled to a narrow 1-0 win over a Hinckley LR side which had won 18 of their 18 league matches, at Butlin Road on Saturday in round two.

Monday’s draw then handed the Valley a trip to Midland League Premier Division side Stourport on December 11.

Last weekend, James Hancocks’ free-kick proved to be the difference between the two UCL Premier Division South sides in the end.

Hinckley did step up a gear or two as the second half progressed, but they came up against a resolute Valley defence against which there was ultimately no way through. 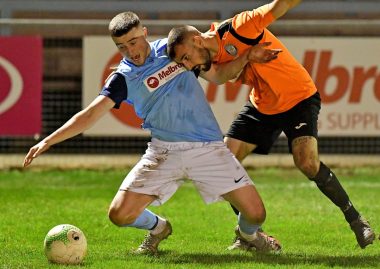 Rugby striker Dylan Parker has to scrap to hold up the ball. Picture by Martin Pulley.

Boss Adams recalled Ashley Bodycote to the starting line-up between the sticks in place of Matty White, with Caine Elliott and Danico Johnson also back in from the off.

Rugby made a bright and positive start, with Luke English blocked out early on after the ball had fallen to him from a corner and Max Johnson also shooting one way over the bar.

Loyiso Recci’s header to an English long throw lacked power, but did nearly sneak past Will Highland in the visitors’ goal, although Valley were then nearly architects of their own downfall at the other end when they somehow allowed Liam Read a shot from a tight angle which Bodycote did well to keep out with his foot. 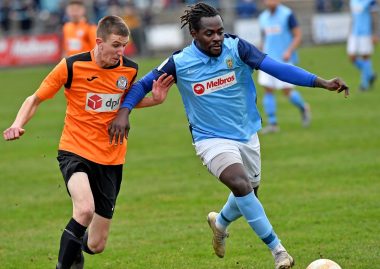 The home side, though, were in the ascendance and showing a level of intensity and purpose sometimes lacking in previous matches.

Their reward came just ahead of the half hour mark, when Highland could only get a hand to Hancocks’ powerfully struck free-kick after Elliott had been clipped when running at the Leicester Road defence.

Town looked to further capitalise on their dominance, and English’s cross from a dangerous position on the right was cut-out by Highland, with the same player then dragging one wide from distance following a strong upfield surge from the full-back.

Hinckley’s best chance of the half came shortly before the interval though, when Bodycote got his angles spot on to deny Dom Brennan after he had pounced on Keenah Rosser’s short back-pass.

The visitors came out in more determined fashion after the restart though, without really threatening the Rugby back-line in the opening exchanges. 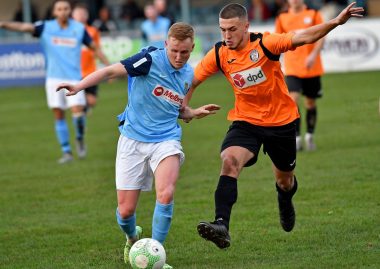 The first opportunity of the new period actually fell to Town, with Edwin Ahenkorah drawing a comfortable save from Highland.

Elliott then stormed down the right hand side, only to see his attempted pull-back to David Kolodynski just cut-out by a Hinckley boot.

However, substitute Jordan Burrows was soon spooning one over the bar for the visitors after Matt Langham had played him in, as the pressure gradually increased on the hosts. Max Johnson then did well to block Danny Jenno’s low free-kick.

Town were still creating the occasional chance of their own though, with Danico Johnson’s speculative strike from distance missing the target and Ahenkorah twice almost forcing the ball home at close quarters.

Rugby consistently put their bodies on the line to keep Hinckley at bay, with Omar Recci and English executing the most notable blocks to strikes from Brennan and Read respectively.