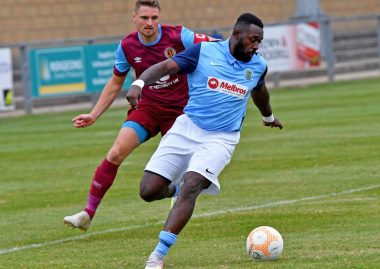 Danico Johnson was a menace throughout. Picture by Martin Pulley.

EMPHATIC Valley strode to a 5-0 rout of Deeping Rangers on Saturday in the biggest outline of their promotion intentions to date.

Fellow United Counties League Premier Division hopefuls Deeping had no answer to the questions asked of them by Carl Adams’ men at Butlin Road, trailing after just three minutes from James Hancocks’ stunning opener, before Danico Johnson doubled Rugby’s lead before the break.

And with a Charlie Evans double and one from Dylan Parker rubbing further salt in the visitors’ wounds after the break, Town set a precedent for which they should aim to replicate for the remainder of the season.

Victory sends Rugby second in the table, a point behind Shepshed Dynamo who are still unbeaten, ahead of a home meeting with Desborough Town on Tuesday night (7.45pm). 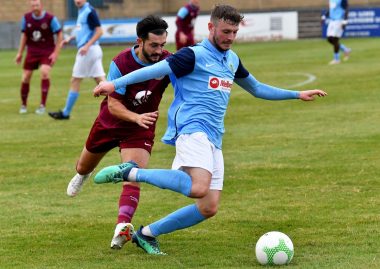 Hancocks settled any early nerves with a 25-yard thunderbolt that swerved before cracking the underside of the bar and going into the net, leaving Dan Swan with no chance.

A well-worked move that culminated in Johnson finishing from Parker’s cut-back doubled Rugby’s advantage in the 39th minute, giving the hosts plenty of impetus to search for more goals after the interval.

The quality of the goals scored will be one of the most pleasing aspects for Adams to take from the performance, with the third again another piece of artistry between the provider Parker – who delivered a delightful cross to the near post – and the goalscorer Evans with the decisive flick.

Parker then grabbed a deserved goal for himself, finishing low after being fed by Lee Thomas down the left flank in the 68th minute. 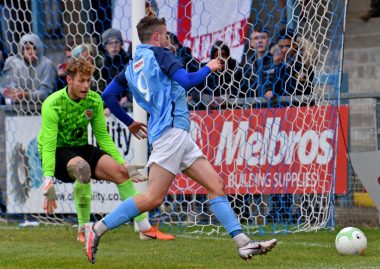 Dylan Parker advances to the byline. Picture by Martin Pulley.

Not content with his contributions. the Rugby forward then registered his third assist of the afternoon when teeing up Evans for his second goal at the far post with 14 minutes left to play.

Town’s mid-week meeting with Desborough is a pay-on-the-gate affair, with no advance tickets available for the fixture.