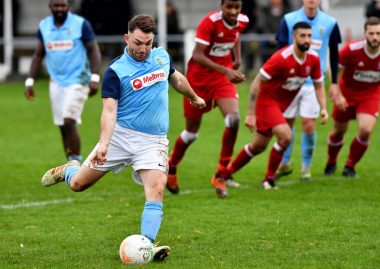 A GOAL in either half from Danico Johnson and Ryan Seal meant Rugby Town returned to winning ways with a straightforward 2-0 victory at GNG Oadby Town on Saturday.

It gave Valley a first win in three games, having been involved in a thrilling midweek 3-3 deadlock with Quorn, followed by a 2-1 defeat at Lutterworth Town the previous week, ensuring Carl Adams’ men got their promotion charge in United Counties League Premier Division back on track.

Considering hosts Oadby were in fine form prior to kick-off – going into the contest with a five-match unbeaten streak – and the result in Leicestershire is all the more impressive.

Lining up with the same XI for a second game in succession, Town broke the deadlock after just 11 minutes when Lee Thomas’ inch-perfect centre was chested down by striker Johnson and then thumped into the net. 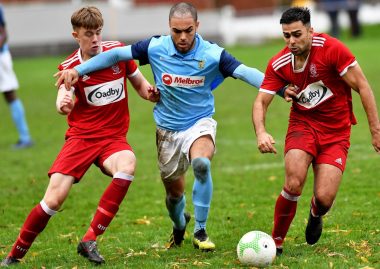 It was a half controlled by Rugby albeit without any further goals at the break, though the visitors could not have wished for a better opportunity to go further ahead when being awarded a penalty two minutes into the second period after Liam Francis was held back inside Oadby’s area.

Dylan Parker was the man to assume responsibility, but it was not to be his day – the initial spot kick saved by the GNG goalkeeper before the rebound clattered against the post.

While Parker was unsuccessful in putting the game to bed at Wigston Road, Seal atoned for the misfortune of his teammate, firing home Town’s second spot kick of the game after Johnson was brought down in the 71st minute.

It was a deserved win on an afternoon spoiled by torrential rain, sending Rugby up to fifth in the table.

Attentions now turn to the first round of the FA Vase on Saturday, when Town visit Dudley Sports of the West Midlands (Regional) Premier Division in a 3pm kick-off at Hillcrest Avenue. 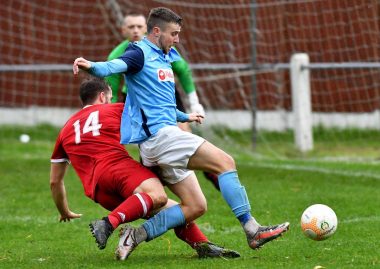 Dylan Parker goes down under a challenge. Picture by Martin Pulley.

Dudley have navigated fellow Step Ten sides Wem Town and Littleton to reach this stage, while Rugby overcame Bilston Town on penalties and Ellesmere Rangers in the qualifying rounds.