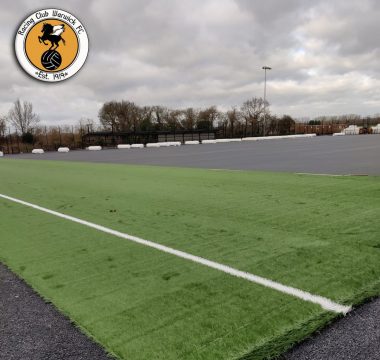 CHAIRMAN Gary Vella says a dream is close to being realised with work on Racing Club Warwick’s new 3G pitch almost being completed.

The new artificial surface at Townsend Meadow, which will allow Racing to become a beacon for local players to develop and connect the team closer to the community – with the aim of the club also branching out into women’s and disability football – accompanies renovation works on the clubhouse.

As part of the new-look set-up at Midland League Premier Division side Warwick, a coffee shop and a sports bar will help cater further to the needs of the local area, completing over £1.2 million worth of investment in RCW in recent years.

And with the finishing touches on the updated facility being made, Vella admits it is a surprise to see the club’s blueprint take shape so quickly.

“We are delighted with the implementation and it follows some incredible teamwork between the Club, the Birmingham FA, Football Foundation and the District Council,” he said.

“It was a little over a year ago that serious plans really begun and in reality it is a process that normally takes much longer to get to this opening point.

“It has been great to see the work implemented over the past few months and we will soon open the facility for use.

“We have so much we will be providing, including girls and women’s football, disability football and of course we will be adding to our existing holiday clubs, community projects and so much more.

“Alongside the smaller ‘nursery’ 3G pitch – which will cater for children under ten – we hope to offer levels of football for all ages and abilities for Warwick and other teams and players in the area.”

While the opening of the facility will be delayed until after the ongoing lockdown, the club are already accommodating requests for advertising, and ask interested parties to contact racingclubwarwick@gmail.com, or to call 07808 404205.

Board member Ryan Goode is also enthused about the updated site, and believes locals will really take to the rejuvenated Townsend Meadow.

“The facility is fantastic and will help galvanise the local community, not just from a sport and playing perspective, but with over 2,000 people using the facility each week it is also a fantastic opportunity for local business to advertise their products here,” he added.

“During these difficult times they can also benefit as we will be offering pitch boards at a fantastic price as a gesture to our local firms and partners.”