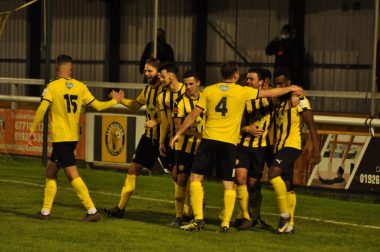 THE CONTINUATION of Leamington’s unbeaten run following Saturday’s 1-1 draw with Gateshead was much in part to the performance of goalkeeper Jake Weaver – according to manager Paul Holleran.

Another late goal at the Community Stadium – this time from defender Junior English – meant the Brakes have not tasted defeat in eight games, a run they will aim to continue on Saturday when visiting mid-table Bradford Park Avenue.

And while Leamington came under real pressure in their bout with the promotion hopefuls last time out, they again displayed the inner resolve that has seen them recover spectacularly from a winless opening month of the campaign in October.

Holleran admitted that while his side were outplayed for spells – particularly during the first half – it was the latest testament of mental strength from his players.

“I could probably talk about us not quite being at it and one or two individual performances, but it was a masterclass from Gateshead in the first half.

“They’ve got a way they play, their system is so well drilled. I was trying to say to our players to play around them, but they really got into their stride early on.

“For us, we really need to be bang at it to be able to compete with a team like Gateshead – it’s as simple as that.

“If it wasn’t for a brilliant individual performance from Jake Weaver, the game would have been dead and buried.

“As we know from this league, it’s hugely important that if you’re second best for most of the day – which we were – you’ve got to try and say in the game.

“If it was the performance of Jake or Kyle Morrison’s at the back, we’ve stayed in the game and then you’ve got to throw a bit of caution to the wind.

“The way we’ve back back in the second half, we were braver, and for the run of games we’ve had for a part-time football club like us – we’ve shown a lot of character again today – you can only take your hat off to the players.”

With the same line-up that had taken a point against Brackley Town, an early chance for Jack Hunter almost resulted in the opener, forcing Weaver to react to a last-minute deflection and tip the ball away.

Weaver made another stop to deny Greg Olley on 28 minutes, only for the ball to fall perfectly back into the attacking midfielder’s path to slam home the opening goal.

Jordan Preston was next to sting the gloves of the home custodian as The Heed continued to ramp up the pressure, Ged Garner also denied with a rasping hit from 20 yards out.

With just the one goal separating the sides at the interval, the Brakes began to venture forward with more endeavour – albeit with little end product to show for their efforts.

Instead, it was the visitors who continued to look most likely to score, Preston’s close-range strike somehow being turned over the bar by the imperious Weaver.

Sam Osbourne had the first attempt on goal for the hosts with 20 minutes remaining, but failed to trouble Harrison Male with a tame shot.

It was a foul on the Brakes playmaker, however, that resulted in the 94th-minute equaliser – Osborne’s resulting free-kick palmed away by Male but only into English’s path to turn the ball home and snatch a point.