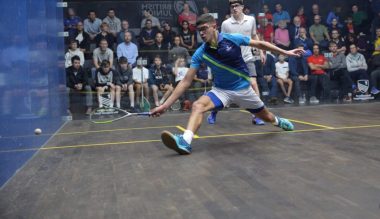 Hassan Khalil is eyeing a place at next year’s Commonwealth Games.

HASSAN Khalil hopes 2021 will provide an opportunity to get back into competitive squash action and continue on a road which could yet lead to the Commonwealth Games.

The 17-year-old from Solihull has endured a frustrating year, with courts now closed once more in England – as they were during the first lockdown.

Khalil, who had been eyeing up a first World Junior Championships on the Gold Coast before the pandemic hit, was training hard through the summer months with the aim of appearing in a PSA World Tour event in the USA in December, only for that too to fall by the wayside.

“There were two wildcard slots and I was going to take one of them,” Khalil said.

“It would have been an unbelievable experience as I would have been playing people much higher up than me and I could potentially have earned points to boost me up the rankings.

“I was really gutted when that was called off. The most difficult thing about it is staying on task, the motivation side of it.

“When it gets cancelled, all of a sudden there is no incentive and motivation can be really difficult.”

Khalil, who represents West Warwickshire Sports Club, is eager to return to doing what he loves as soon as possible as he bids to add further triumphs to an already glittering junior career.

The squash prodigy won the French Junior Open aged 14 and became the British Under-17 champion last year, while he is also a two-time US Junior Open semi-finalist.

Khalil has also enjoyed success as part of the England youth set-up, with which he is currently unbeaten.

“I have played for England five times and we have won on all five occasions,” he said, reflecting on a haul which includes three European Team Championship titles.

“I really enjoy the contrast between team and individual events.

“When I’m playing an individual event, I’m still representing England but I’m playing for myself.

“They are a good bunch of lads and we train hard. We are scattered across the country so it’s always nice when we get the chance to play together.

“I would love to compete in the Commonwealth Games for England and hopefully one day, if and when squash gets into the Olympics, compete in that.

“That would mean the world to me – to represent England or Great Britain on such a big stage with the best athletes in the world.”

Khalil’s squash journey began in Egypt, where he was born and lived until the age of seven.

“Here in England you have football and rugby – in Egypt it’s football and squash,” said Khalil, whose two younger brothers, Ali and Ismail, also play.

“Squash is massive in Egypt and the top four men’s players on the professional tour are Egyptian.

“I first started playing when I was five, just through going to watch my dad play and getting involved from there.

“I looked up to Ramy Ashour and Amr Shabana, two of the greatest squash players of all time.”

Khalil’s passion for the sport did not dampen upon moving to the UK, while he was also a county standard tennis player and keen swimmer and footballer before deciding to focus on squash aged 11.

Now balancing his on-court commitments with A-levels at Warwick School, Khalil is grateful for support from SportsAid and Gateley – a leading legal and professional services group who work with forward thinkers and new talent in both business and in sport – for helping him continue to strive towards his ultimate ambitions.

Gateley are proud to be partnering with SportsAid to give additional support to young athletes and Khalil said: “It’s absolutely massive, it’s a game changer.

“The funding has helped me develop in all aspects, not just my squash.

“This year, the funding will go towards competing in satellite events around England, paying for the accommodation and travel costs.

“It will also go towards physio, nutrition and strength and conditioning, which is really helpful for developing me as an athlete.”

Each Gateley-sponsored athlete has the ambition, work ethic and desire to succeed; values that perfectly align with our own business.

For more information about Gateley’s partnership with SportsAid visit the following link.