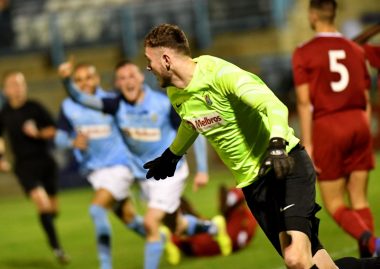 THE MOST unlikely of comebacks was completed in stunning circumstances by Rugby Town after goalkeeper Sam Lomax headed a late equaliser to claim a point against Quorn.

Valley’s herculean effort to restore parity in Tuesday night’s 3-3 thriller at Butlin Road was a just reward for a marked upturn in performance after the restart – Lomax’s leveller the perfect way to cap off the revival.

While Kurtis Revan was ruled out of the contest through injury, the return of striker Danico Johnson was a welcome sight as the only Rugby change in midweek.

But the presence of one of Town’s dangerous frontmen did little to discourage the visitors from Leicestershire, who took the lead in the United Counties League Premier Division fixture.

It was Leke Shodunke who provided it, giving Keenah Rosser no end of problems before firing home via Lomax’s post inside the opening ten minutes. 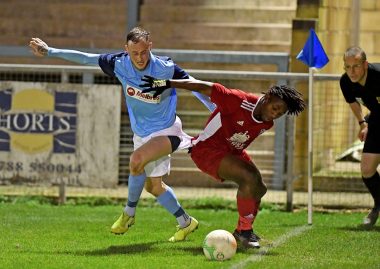 Midway through the half, the visitors had some breathing space after Leavi Oshungbure touched the ball home following a looping cross from Stephen Hart.

Quorn made mincemeat of the hosts and duly added a third moments later, Tawanda Mangondoza finishing off a counter-attack with a smart finish to put the away side in control.

Whatever manager Carl Adams said at half-time clearly had an impact, as Ryan Seal laid on Dylan Parker’s goal before finding the net himself in the closing stages to prompt late hope of parity.

With Quorn shorthanded by a sin bin for Steve Hart for the game’s conclusion, Lomax was the beneficiary of an excellent corner delivery from Seal to equalise and steal the headlines.

Rugby will hope that their regular outfield players can assume the goalscoring brunt from Lomax in Saturday’s trip to GNG Oadby Town (3pm).