HOTSHOT defender Liam Francis ensured his red-hot run of scoring form continued as Rugby Town made it three wins from three against Loughborough University on Saturday. 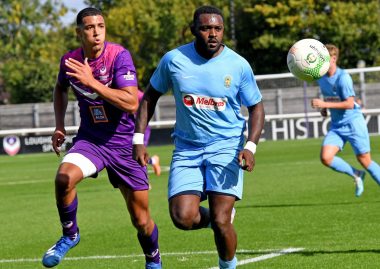 Danico Johnson, right, wins the chase to the ball. Picture by Martin Pulley.

Valley’s 2-0 victory at the University Stadium means they are the only side in the United Counties League Premier Division with a perfect record after the opening run of fixtures, midfielder Caine Elliott the other man on target at the weekend.

Whether it is a coincidence that Town have won every game that 30-year-old Francis has found the net remains to be seen, having chipped in with four of his side’s 13 league goals to date and with two clean sheets to boot, but it is a certainty that manager Carl Adams will hope the defender’s scoring streak does not end anytime soon.

Two goals in the space of 13 minutes after the restart essentially won the game for visiting Valley, having been shut out in the opening period for the first time in the league this season.

With one change to the starting XI that saw off Cogenhoe United in midweek, Justin Marsden dropped to the bench with Lee Thomas assuming his place.

Rugby are a side full of confidence at the moment, so it was little surprised that they enjoyed the best of the opening exchanges.

Dylan Parker, who finished the opening two league fixtures with six goals, almost added to that tally when forcing Loughborough ‘keeper Jake Hilton into a save – having initially set-up Kurtis Revan for a blocked effort.

While the visitors went close once more through Danico Johnson’s ambitious shot from an acute angle, the students countered and enjoyed opportunities of their own. 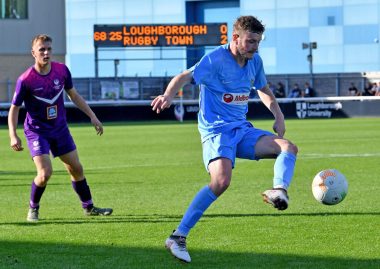 First, Eoin McKeown’s cross-shot was begging to be tapped home after rolling dangerously across the six-yard box, while Ronan Silva should have done better when well-placed.

Further efforts from Cain Noble and McKeown failed to trouble Rugby custodian Sam Lomax, while James Hancocks forced Hilton into a save down the other end, before the best chance of the half was squandered by Revan.

With the ball falling to him from close-range, his subsequent strike was somehow kept out by a miraculous block to ensure parity, a scoreline that remained goalless at the break only for Lomax’s outstretched arm to tip away Silva’s audacious drive.

The long-awaited breakthrough arrived six minutes into the half, albeit in fortunate circumstances.

Johnson’s lofted free-kick was fired into the penalty area and, appearing to have been claimed by Hilton, was fumbled into the path of Francis to nudge into the gaping net.

It was a setback which the University side were unable to recover from, especially with Elliott dispatching a second moments afterwards when Parker’s parried shot sat up nicely for him.

Chris Forino could have caused some uneasiness approaching the later stages, had his header found the net and not the advertising hoardings – a lack of composure that was evident in Marsden’s wild strike that flew over the bar in the game’s remainder.

Shepshed Dynamo, who lost grip of their 100% record following a 3-0 humbling by Ilkeston Town last time out, now pose the next challenge at The Dovecote Stadium on Tuesday night (7.45pm), before the visit of Bilston Town to Butlin Road on Saturday (3pm).