RUGBY Town returned to winning ways in the UCL Premier Division South with a comfortable 3-0 victory over Potton United at Butlin Road on Saturday.

The hosts recorded their first UCL success in four attempts thanks to a goal from debutant Lamar Parkes and a Liam Francis’ brace.

Parkes was one of three new signings made by boss Carl Adams ahead of the fixture, with defender Luke English and the returning Ash Bodycote also straight into Rugby’s starting line-up as part of five changes from the disappointing midweek draw against Cogenhoe.

Valley made a bright start, with Parkes in particular catching the eye with one shot from the edge of the penalty area which bounced just wide.

David Kolodynski almost squeezed one past United keeper Sam Irish at his near post, with Parkes then launching another decent strike from a similar position to the first.

It was third time lucky for the ex-Oadby man on 26 minutes when his effort from distance took a large deflection off Liam Andrews to wrong foot Irish and cross the line to open the scoring.

Town’s early dominance continued after the goal, with Kolodynski lifting one over from a good position after he had found space behind the Potton defence, although there was a brief scare at the other end when Barry Fitzharris did well with his sliding tackle to deny Sam Willis a shooting opportunity. 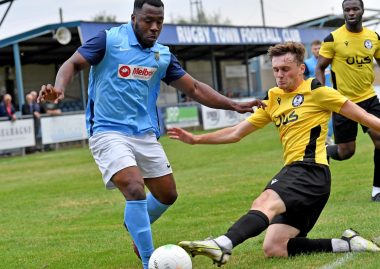 Normal service was resumed when Rugby went further ahead with four minutes of the first half remaining, with Francis rising to powerfully head home a long throw by English.

It was a particularly tetchy start to the new period, with Valley’s best chance of further advancement coming when Parkes blazed over a cut-back from the left by Dylan Parker. 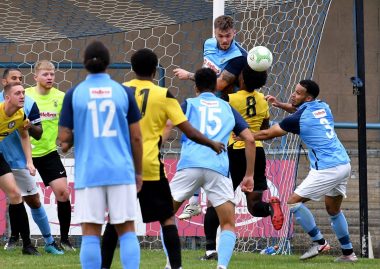 Loren Maxwell dragged one wide for the visitors, before another English long throw caused problems in the Potton defence – ending with a Kolodynski strike which lacked power and therefore did not trouble Irish.

However the away keeper was the architect of his downfall shortly after, when he attempted to launch the ball upfield, only to see it bounce off the back of one of his defenders and fall fortuitously at the feet of Francis to execute a simple finish from around twenty yards.

With the points now in the bag, Town controlled the bulk of the remaining half an hour without really extending Irish again.

Sub Justin Marsden did draw one decent stop from him with his legs, but fellow replacement Owen Bennett sent his long range effort wide and both Marsden and Kolodynski had shots blocked.

Parker blasted his attempt into the chest of a defender, before sending another effort over – with English another to miss the target with his strike late-on.