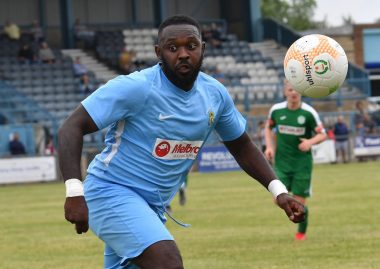 Danico Johnson has been in form for Valley with four goals in his last three games. Picture by Martin Pulley.

THE PRE-SEASON spoils were shared between Rugby Town and FC Stratford on Tuesday night, after Ethan Champkins’ early second-half brace secured a 2-2 draw for the visitors at Butlin Road.

Carl Adams’ side looked good value at the break with a 2-0 lead, having gone in front through Danico Johnson’s instinctive double.

But with substitute Champkins tapping in early in the second half, the Stratford man was on hand moments later to glance home a right-flank centre with his head to deny Valley.

It spelt further frustration for Town in the wake of last weekend’s 2-1 home reverse against local rivals Bedworth United.

Forced to cope without a number of first-team members, Rugby fell behind when a Ryan Moore corner outwitted goalkeeper Ben Newey and found the back of the net.

Then, shortly after, a dead-ball situation offered Johnson the opportunity to blast home a leveller after former Valley custodian Sam Lomax conceded a cheap free kick.

It was not to be for Rugby however, as a trialist rifled home the winner late on to hand Town their second defeat of pre-season.

On Saturday, a home encounter with Gresley Rovers represents Valley’s final warm-up, before getting life in United Counties Premier Division South underway at home to Lutterworth Town on Tuesday night.