Edwards' half-century in vain for Rugby; Not so pitch perfect for Willoughby 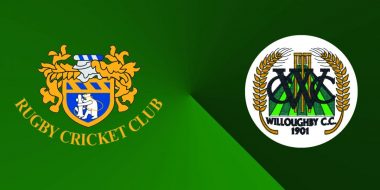 Making the trip to Sutton Coldfield, Matthew Ewer’s team batted reasonably well until being bowled out for 187 in the 49th over, on an afternoon where Streetly just had too much firepower for Rugby’s bowlers to contend with.

The visitors made an ideal start when openers Hugh Cochrane (35) and Raj Chohan (19) combined for a stand of 67, though the dismissal of both in quick succession by Mateen Khan (4-39) put a considerable dent in Rugby’s run rate.

It wasn’t until the introduction of Edwards (54) at number five when the innings picked up again, putting together a partnership of 47 with Daanyal Sadiq (18) that took the away side to 183-8.

Rugby lasted little more than an over after the dismissal of their talisman, bringing forward the start of Streetly’s reply earlier than the visitors would have wanted.

The hosts’ Muhammad Daniyaal (23) and Neil Curtis (38) hit an opening stand of 61 runs to get their side off to an encouraging start, prior to some quickfire wickets from Sadiq (3-44).

Though skipper Matt Hinton (5) did not prove the batting partner the hosts’ hot-shot Imran Qadir (103, no) had hoped for, it was essentially a one-man show from that point onwards, as the latter combined with Craig Moore (10, no) to put on a partnership of 98 to beat their opponents after 36 overs.

Signifying just how important he was to his side, Qadir struck three successive sixes to bury the visitors and leave them second-bottom – a position Rugby hope to improve against Solihull Municipal this weekend.

ELSEWHERE, an unpredictable pitch at Sun Hardingstone caused havoc for Willoughby in their two-wicket defeat in Northamptonshire League Division Six.

Batting first on the uncompromising surface, the visitors managed 122-9 inside their 45 overs, with number three Ashley Rayner (42) the standout name in a below-par – albeit understandable – effort at the crease from Willoughby.

Though Dan Farrow (4-16) bowled emphatically, it was not enough for Willoughby to prevent defeat, ahead of Saturday’s home meeting with Stewarts & Lloyds Corby Seconds.