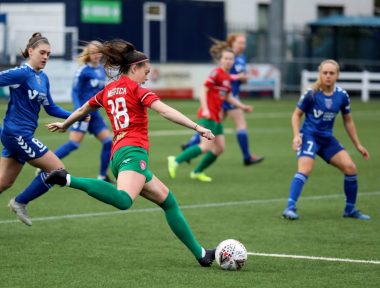 Number 18 Beth Merrick tries her luck on a goal-laden afternoon for the forward against Durham. Picture: Jeff Bennett.

A first-half Beth Merrick hat-trick had the Red and Greens in the ascendancy with a 3-1 lead at half-time – following Beth Hepple’s reply – but ultimately fell short after the break when Durham rallied with Emily Roberts’ double and a Sarah McFadden effort at Butts Park Arena.

Having pushed the FA Women’s Championship title contenders all the way last weekend, Bradford is keen to keep building on the positives – starting with a crunch clash near the bottom of the table at London Bees on Sunday.

“We are in the process of building something. I’m really pleased with my group,” she said.

“If we can keep performing like that, we will win games. We made Durham work for it and that was the main aim – they didn’t come and roll us over which people thought they might.

“We want to go out of 2020 with a bang, if we can do what we did against Durham, we’ll make London Bees work hard.

“I trust this group and I don’t doubt that we’ll start getting results.”