Borough knocked out of League Cup on penalties

RUGBY Borough will aim to refocus on their league title quest on Saturday after mixed fortunes in two cup competitions.

Having made progress in the Coventry Charity Cup on Saturday, Dan Carter’s side suffered defeat for the first time this season after losing out in the penalty shoot-out to AFC North Kilworth on Monday night in the Everards Tiger League Cup. 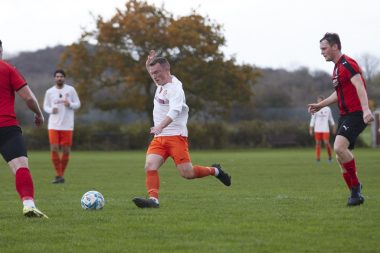 Rugby’s Tommy Glasscoe on the ball against Stockton.

Rugby, the Coventry Charity Cup holders, just had the edge in a competitive tie at Coventry Alliance side Stockton, with Jack Hilton bagging the only goal in the first half. Dale Linton broke the offside trap and set up Hilton to tuck home his shot. 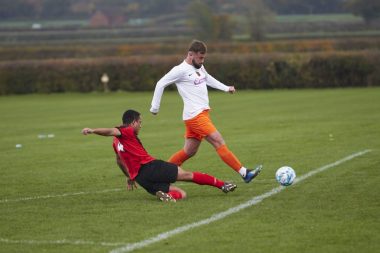 On Monday, a much-changed side had to contend with tricky foggy conditions before being edged out 4-2 on spot-kicks after a 2-2 draw at Kilsby Lane.

Jarrad Pickering had given North Kilworth the interval lead but Bren King and Brad Harris put Rugby 2-1 ahead. Then with five minutes left North Kilworth, unbeaten in Division Two, levelled with a stunning free-kick from Joe Williams.

Table-toppers Rugby return to the Leics Senior League Premier Division when they seek a 14th win in a row in an away fixture at Hathern.