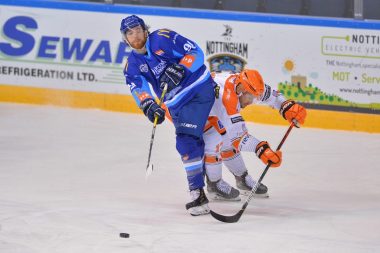 All seemed to be according to plan for Coventry at Motorpoint Arena when storming into a two-goal lead in the opening period, only to lose sight of their hard work when conceding three unanswered strikes in the middle 20.

And despite finding the net twice more in the final period, another three-goal haul from the Steelers proved a step too far.

Assessing his side’s night on the ice, Stewart addressed the need to tighten up at the back.

“We have to play a full 60 minutes against a team like Sheffield,” said the 42-year-old.

“I liked our first [period] but we were given a bit of a run around in the second period.

“Our third was much better, but I don’t think we were very good in front of our own net and we need to start taking care of that.”

The Blaze were unchanged for their sixth game of the Elite Series, naming Canadian Shan Owen between the pipes once more – a man who was a mere bystander during an opening 20 minutes dominated by Coventry.

Tristan Keck netted the first on 4.09 after Ben Churchfield had kept out an initial strike, before Stewart’s men survived being short-handed for two minutes when Max Krogdahl was punished for tripping an opponent.

With the Steelers left a man light midway through the period, Blaze took full advantage as Luke Ferrara buried a loose puck on the follow-up after Sam Duggan’s shot was saved on 13.43.

Sheffield looked a side reinvigorated during the second period, raising their level and taking full advantage of Krogdahl’s second dismissal – halving the deficit through Tanner Eberle on 21.05.

With Owen now tested at regular intervals, it only seemed a matter of time before the Steelers pulled level.

And so it proved, as Jonathan Phillips finished from David Phillips’ through pass on 36.08, before Sam Jones sent Sheffield ahead just 35 seconds later with a shot that wrong-footed Coventry’s net-minder.

With the Blaze having it all to do in the final period, Mike Hammond hauled Coventry level on 42.18, breaking away and firing home a stunning solo goal.

But in spite of the game being back in the balance, it was not long before Sheffield turned the tide back in their favour.

Sondre Olden found the net from a tight angle on 46.04, before Jason Hewitt gave the Steelers a two-goal cushion on 52.49 following excellent build-up play.

Keck ensured a nervy finale with just 3 minutes and 28 seconds left to play, finishing of a counter-attack to claim his his sixth goal of the season.

For all of Coventry’s best efforts to force overtime, Sheffield rubbed further salt in the wound with Brendan Connolly’s tap into an empty net with a second remaining.

The Blaze, third, take on second-placed Manchester Storm on Thursday, before rounding off the week against Nottingham Panthers on Saturday night.