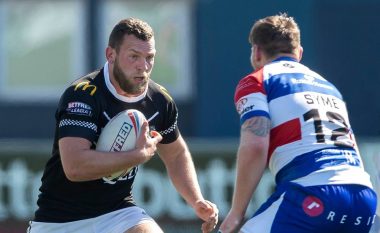 COVENTRY Bears‘ quest to record back-to-back wins in Betfred League One this term continues after a 36-12 away defeat to North Wales Crusaders last weekend.

In a result which has typified the inconsistent nature of the Bears so far, Richard Squires’ men found themselves unable to keep close tabs on the hosts in Colwyn Bay, providing a setback a week after a stunning comeback win over Rochdale Hornets.

Having found themselves 22-0 down, Coventry fought in vain to claw back the deficit at Eirias Stadium.

North Wales hit the front after just five minutes when a flowing move led to Tymi Dow-Nikau touching down for a try that was converted by Tommy Johnson.

With the Crusaders’ threat unrelenting, the hosts almost had more points on the board when Patrick Ah-Van found a gap down the right flank, only to offload the ball to Joe Sanderson with a forward pass that was penalised.

Moments later, the heroics of Liam Welham denied a second try in the left corner but with the next chance that came their way, North Wales took full advantage. Winger Rob Massam evaded a number of attempts to halt his 40-metre run before crashing down for a second converted score.

Then, with Coventry beginning to gain a foothold, a third try courtesy of Johnson’s jink inside through the visitors’ defence – this time unconverted – came as a hammer blow before the break.

With much improvement needed in the second half, Coventry again looked sluggish when emerging from the changing rooms and conceded six more points when Ben Morris latched onto a forward kick and raced home.

While player-coach Dave Scott registered the first Bears points of the afternoon with clever movement through the Crusaders’ rearguard, Dan Coates’ converting, it was not enough to spark a comeback.

Dow-Nikau was again at the forefront to punish the away side with his second score of the game, shortly before Massam made it 32-6 after a devastating breakaway.

To Bears’ credit, they sought to make amends for their below-par showing, scoring their second converted try of the game. After receiving a high pass from Coates, Sam Bowring did the rest by crossing the whitewash.

But the scoring was not quite finished, as Massam wrapped up his hat-trick of tries with an unconverted effort scored in the corner of the pitch.