RUGBY Town manager Carl Adams says the margins between a good start and an excellent one are very fine, heading into this weekend’s meeting with Deeping Rangers at Butlin Road. 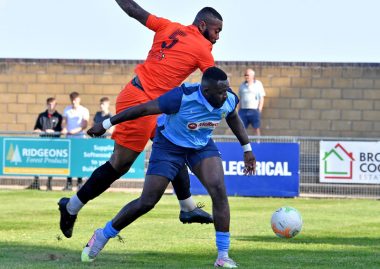 Danico Johnson was one of Rugby’s returning stars against Bilston Town. Picture by Martin Pulley.

Valley currently sit second in the United Counties League Premier Division with three wins from four, going down last time out to Shepshed Dynamo in a 2-0 reverse.

And after seeing his side bounce back with a penalty shoot-out win over Bilston Town in FA Vase qualifying last weekend, the implications of three points on Saturday (3pm) will go a long way to assessing the start that his side have made.

“It very much is about fine lines,” Adams explained.

“Three points at the weekend and it would be 12 points from 15 in the league, which would be an excellent return considering the run of fixtures we’ve had.

“Whereas if we don’t get anything against Deeping and it will probably be seen as only an average beginning.”

This weekend’s visitors have been mainstay challengers for promotion in recent seasons, but have made a mixed start to the campaign with seven points to date.

But if a fourth victory in the league this term is to be achieved, Adams says big improvements will be needed from their showing against West Midlands (Regional) League outfit Bilston – a result which set Rugby up for a home clash with Ellesmere Rangers in the second qualifying round of the Vase next month (October 10).

“I accept that we were poor for large periods against Bilston,” he continued.

“The two tough games that we had played previously appeared to have taken it out of us, and we looked very flat and off the pace at times.

“To have three of the top contenders for promotion – Loughborough, Shepshed and Deeping – back-to-back at such an early stage of the season was always going to be a tough call.

“We played well in winning at Loughborough and I genuinely believe that we were the better side at Shepshed, but unfortunately left empty handed from that one.

“I’m sure there are plenty of people that would have accepted two draws from two such testing away games, so from that standpoint we ended up in credit despite the Shepshed defeat.”

As far as the injury picture at the club is concerned, Town are looking far healthier, with Danico Johnson and Jamal Clarke both returning to the starting XI after groin and hamstring problems respectively, while Ryan Seal appeared from the bench in the FA Vase win – scoring in the shoot-out that followed – after recovering from a dislocated elbow in pre-season.

“We’ve got a few struggling with niggles or getting back up to speed after injuries, which also didn’t help at the weekend, but once everyone is fully fit again then we should have a strong squad here,” Adams concluded.