THE Mayor of Rugby joined dignitaries and invited guests at St Andrew’s Church for the annual Civic Sunday service.

Civic Sunday traditionally welcomes Rugby’s new Mayor to the role and recognises the part councillors and council officers play in the life of the borough.

The theme of Civic Sunday – ‘protecting the environment’ – was chosen by The Mayor.

The Rector of Rugby, the Reverend Canon Edmund Newey, led the service, and Pandit Madhu Shastri conducted the lighting of the lamp and blessing – a Hindu ritual carried out at the start of ceremonies to remove darkness, ignorance and unhappiness, while spreading abundance, prosperity and knowledge.

Father Shinto Kumminiyil, of St Marie’s Church, read a prayer for the borough of Rugby, while the Mayor’s Cadet, Cadet Flight Sgt Benjamin Walker of the Royal Air Force Cadets (TA Centre, Rugby), read the Parable of the Good Samaritan from the Bible. 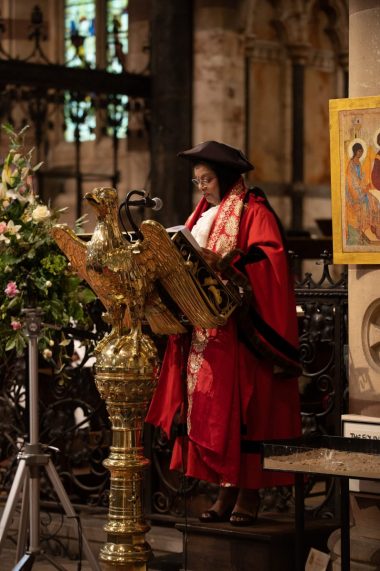 In addition to traditional hymns and the National Anthem, music at the Civic Sunday service included Adiyogi: The Source of Yoga, a song dedicated to Lord Shiva, the originator of yoga, and the Hindu hymn Om Jai Jagdish, a prayer dedicated to Lord Vishnu.

Cllr Mrs Roberts said: “I feel truly honoured to be Rugby’s first citizen and I was delighted to welcome the socially-distanced congregation for Civic Sunday.

“The service was a wonderful opportunity to promote the theme of my Mayoral year, respecting and protecting the environment, and reaffirm the commitment councillors have made to serve Rugby and its communities.”