A BEREAVED Rugby mum has written a book to help children cope with grief, inspired by a dream her son had after the sudden death of her 31-year-old husband.

Abimbola Shotade, 33, wrote My Sisters Are Not Good at Wrestling following her son’s dream of a final adventure and goodbye with his father.

Abimbola’s husband died in a car crash in August 2018 when she was 31, and her children were between 11 months and eight years old.

The couple had been married for 10 years, and had three children.

Following her husband’s death, Abimbola saw the effect of grief on her children – first in the aftermath of his death, and later in the years that followed.

Inspired by her faith, she decided to turn her son’s dream into a story to help other grieving children. 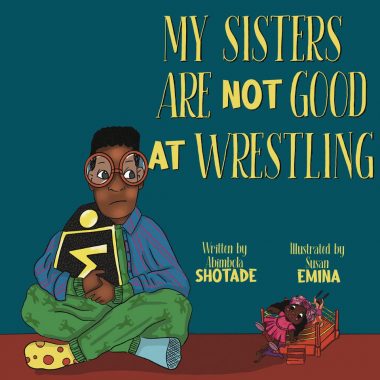 The book follows the story of eight-year-old EJ, who goes on a magical adventure with his father who had suddenly passed away.

The heartwarming journey gives EJ the chance to have fun with his father while processing his feelings, thoughts and emotions.

Abimbola hopes the book will help children deal with the shock and loss of losing a loved one and the grief that follows years after a parent dies.

Abimbola said: “In 2018, my family went through a tragedy. My children lost their father, and I lost my husband suddenly. It was a traumatic time for us; my children cried every night, missing their father.

“My son was the oldest and the only boy, and he was very close to his father. His dream, which has themes of heaven and Christianity, helped him cope a little with my husband’s loss.

“It was a way for him to process all the many different levels of grief he was experiencing and say goodbye to his dad.

“Losing a loved one is the most crippling feeling, and I hope to help grieving children to understand that even though our loved ones may be physically gone, they will be with us always.”

Visit https://tinyurl.com/6vhbmcw5 to pre-order My Sisters Are Not Good at Wrestling.