THE PRESIDENT of the Royal British Legion’s Hillmorton branch has been honoured as part of the organisation’s centenary celebrations – on the 100th anniversary of his local War Memorial.

Larry Burke is one of five people in Warwickshire to receive a Membership Centenary Award, having been nominated by fellow members in recognition of the contribution he has made to the work of the Legion in his community.

His award is for service, and his nomination will now go forward to the Area Finals – and, if successful, on to the National Finals.

Larry has been an active member of the branch for 30 years. He helps to organise the annual Poppy Appeal, and has been instrumental in developing and increasing membership with regular branch meetings and activities, including organising a visit to the National Memorial Arboretum in 2019.

Responsible for maintaining the Branch’s profile in the local community, he has sought to preserve the Annual Remembrance Sunday Parade and Service, actively engaging with the town’s cadet units, local youth organisations and other organisations to participate.

Instrumental in decorating the Hillmorton War Memorial, in 2014 he organised a candlelit procession and lighting of the Memorial when the names and details of all those from Hillmorton who died were read out.

Larry was presented Larry with his badge and certificate by Branch Chairman Kathryn Lawrence on Saturday March 6 – the centenary of the unveiling of Hillmorton War Memorial. 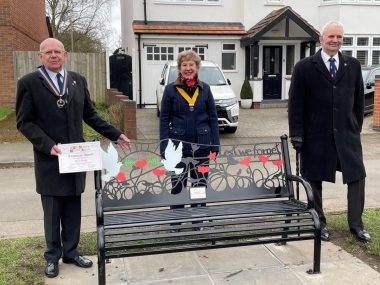 A ‘Lest We Forget’ bench was installed at the memorial to mark the anniversary, and Branch Vice-Chairman John Dacombe recycled poppy wreaths to form the number 100, which was placed at the memorial together with information on all those whose names appear.

Kathryn Lawrence said: “I would like to thank Warwickshire County Councillor Yousef Dahmash for helping to fund the bench and to Rugby Borough Council for its installation. I hope that it will be a place for reflection in the years to come.

“We hope that we will be able to re-dedicate the memorial and bless the bench on the weekend of June 26, to coincide with Armed Forces Day when Hillmorton Ex-Servicemen’s Club and Institute will be celebrating its centenary.”