A ‘COMPASSIONATE’ nine-year-old go-karting prodigy has raised an incredible £19,500 to help Ukrainian refugees by organising a star-studded Grand Prix.

Jarlath Sayer put the wheels in motion for the sponsored charity event after he became upset seeing children and families on TV having to flee their country – and became the talk of the Formula 1 scene when his idea captured the imagination of the professionals.

The go-karting event saw 26 teams battle to complete as many laps as possible in three hours.

The Bilton Grange Preparatory School pupil headed up an auction, waved the start and finish flags, and presented the winner’s trophy to an all-female team headed up by professional racing driver Jess Hawkins. 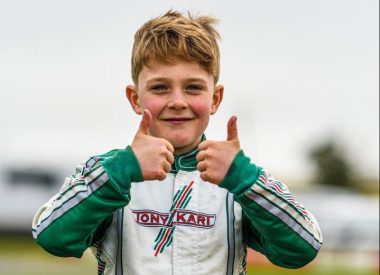 Jarlath, who lives in Clay Coton near Lilbourne, told The Observer: “I saw the news and felt sorry for all the people in Ukraine. I thought they did nothing wrong, and I imagined how I would feel if I was in that situation, and how I would have to leave my country, my house and my hobby.

“As I love go-karting, I thought I could do a race to help raise money.

“It makes me very happy and proud to be doing something to help other people.”

Jarlath marketed the event himself by creating a website, and approached Lewis Hamilton’s old track, Rye House Raceway in Hertfordshire, to host the race.

With the help of family friend and event organiser Mark Garrett, the idea accelerated further after Jarlath made it into the national press – bringing to the attention of Toto Wolff, head of the Mercedes Benz Formula 1 team.

The team donated items for the auction including gloves signed by Lewis Hamilton and George Russell, signed technical drawings of the 2021 F1 car, and a group tour of Mercedes’ Formula 1 headquarters.

Jarlath said: “I could not believe it when Formula 1 teams got involved and the event got so big.” 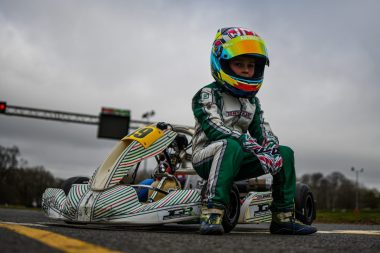 Jarlath is in his rookie year competing in the British Karting Championship for the Jamie Green Racing team.

Jarlath, who is in his rookie year competing in the British Karting Championship for the Jamie Green Racing team, got his first go-kart when he was just five years old – and already has a room full of trophies.

He said: “I like the intensity and speed and I love racing, especially throwing my kart in for overtaking.

“I want to be an F1 driver and beat Lewis Hamilton’s world record,” he said. “I want to keep racing and trying my best. I really want to race well and do myself and my team proud.”

Jarlath’s Head Master at Bilton Grange, Gareth Jones, said: “Jarlath’s achievement is remarkable. His desire to help others and his initiative to actually make a difference is very special, and an example to others that we should rightly celebrate.

“The world needs more compassion, more philanthropic gestures and more energy channelled into supporting others. Jarlath has demonstrated all of those qualities in his fund-raising.”

Visit https://tinyurl.com/4ns8eek3 to donate to the fund-raising campaign.