A NEW housing plan for Brandon Stadium – the former home of the Coventry Bees speedway team – has been submitted by the site’s owners.

A rival application is due to be made by campaign group Save Coventry Speedway and Stox to bring motorsports back to the stadium – but Brandon Estates claim that reviving the site as a speedway stadium is ‘not a viable use’.

The company submitted a plan to build 137 homes on the site three years ago, but that has yet to be considered by Rugby Borough Council (RBC).

Brandon Estates says it shaped its updated proposals around priorities including enhancing local open spaces, promoting sustainable growth through the delivery of ‘suitable and affordable’ housing, and enhancing opportunities for active and healthy lifestyles. 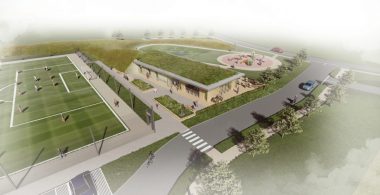 A spokesperson said: “We are very keen to ensure that the redevelopment of the site is handled sensitively to deliver as much local benefit as possible to the surrounding communities.

“We are aware that some wish to see this site returned as a speedway stadium. Whilst we have looked into this in great detail, it is unfortunately not a viable use for this site, which is why we’ve brought forward this revised application.

“The new proposals will contribute much needed new housing to Rugby, and provide a significant improvement on the current community uses in the local area. Our proposals represent a much more sustainable use for this site than its current or former uses, and would also significantly increase the opportunity for the site to be used and enjoyed by the local community.”

Save Coventry Speedway and Stox says its planning application will form part of a new Masterplan for the site aimed at restoring racing, and adding several other uses ‘all in keeping with its status as a celebrated sports venue’.

The group is proposing to convert Hangar No.1, at the front of the stadium, into a museum celebrating the history of speedway and stock car racing at the venue.

The current under-stand bar area would be converted into a gymnasium and training centre, for the Great Britain Speedway Team to use as its national base, with facilities also available to the Coventry Bees riders, local sports teams, and the general public.

The existing dog kennel building would be converted into a bar and catering outlet.

The group also proposes a cycle trail around the stadium site, the resurfacing of the current greyhound track to provide a cycle training facility for the local community, other cycle-related activities including proficiency training and maintenance, and a proposal for equine events on the track infield.

A rival application from the Save Coventry Speedway and Stox campaign group proposes to bring motorsports back to the stadium.

Campaign Group spokesman Jeff Davies said: “Since the forced closure of the stadium by the developers in 2017, opposition to their plans has been unprecedented.

“This has resulted in their planning application, submitted well over three years ago, being largely ridiculed, and not just by ourselves – the findings of the Independent Report commissioned by the council were damning for the developers.

“However, it has also been fair to question whether there are realistic alternative proposals involving the return of sport, especially given the condition the developers have enabled the stadium to fall into.

“This planning application emphatically answers that question, by laying out a careful scheme of proposals which are entirely deliverable and add to the overall viability of the site without any disturbance to the nearby residents and the village as a whole.

“We urge the local and wider sporting community to get behind these proposals, and RBC to take a proactive view and seize the opportunity to support a scheme which would end four-and-a-half years of misery for all concerned.”

The group’s plans have been endorsed by Warren Hunter – whose offer to buy the stadium over a year ago remains undetermined by the developers.

Save Coventry Speedway and Stox added that the Masterplan would also ensure a 24/7 security presence on the site, “immediately ending the years of misery suffered by residents caused by inadequate and then non-existent security measures”.

Brandon Estates is involved in a court case with RBC over an allegation that it failed to adequately secure the site against intruders.

The company is accused of failing to comply with a community protection notice issued by the council.

A trial at Birmingham Magistrates’ Court, which is expected to last for four days, is set to start on October 11 this year.

Visit http://savecoventryspeedway.com/newsletter to see Save Coventry Speedway and Stox’s Masterplan for the site.

Brandon Estates’ plan will be considered by RBC over coming months.