OBJECTS which open a window on Rugby’s rich history, from a Viking ring discovered in a field to a music magazine featuring psychedelic rock legends Spacemen 3 on the cover, take centre stage in a new exhibition.

Every Object Tells A Story delves deep into Rugby Art Gallery and Museum’s social history and archaeological collections to present an Aladdin’s cave of objects, each with a tale to tell.

A section of an eighth century carved stone cross discovered when St Andrew’s Church was built features in the exhibition, together with the boots worn by Lady Dorothie Feilding, daughter of the Earl of Denbigh, while serving on the frontline in the First World War. 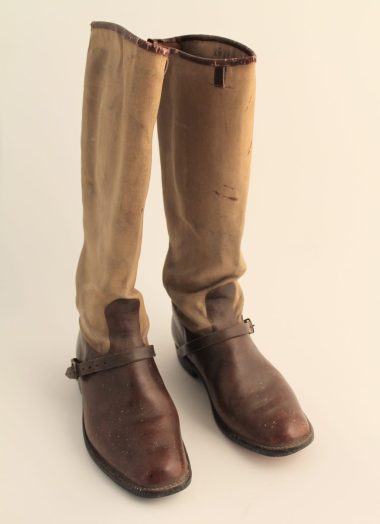 The boots worn by Lady Dorothie Feilding on the frontline in Flanders during the First World War feature in Every Object Tells A Story.

Lady Dorothie left the family estate in Newnham Paddox, near Rugby, in 1914 to drive ambulances which ferried wounded soldiers from the heat of battle in Flanders to clearing hospitals.

Her bravery was honoured when she became one of the first women to receive a Military Medal from the British Army.

Every Object Tells A Story also includes a Viking ring discovered in Kings Newnham and a stone shield dating from the 1670s, which belonged to the Skipwith family of Newbold Revel Hall and was found in a field in Whilton, near Daventry, in 2014.

A photograph of Rugby Portland Cement’s original Crown House, built in 1936, features in the exhibition, an early example of the work of photographer Norman Parkinson.

Parkinson went on to become the most celebrated fashion photographer of the 20th century, a pioneer credited with creating the age of the supermodel with his work for Vogue and Harper’s Bazaar, and who photographed the likes of the Royal Family, Audrey Hepburn, David Bowie and The Beatles.

And in the year Queen Elizabeth II celebrates her Platinum Jubilee, the exhibition has a GEC television set bought in Rugby in 1953 to watch her coronation – a television first which attracted a UK audience of 27million.

Every Object Tells A Story runs in The Studio at Rugby Art Gallery and Museum from Saturday 12 February to Friday 16 September.

Coun Howard Roberts, Rugby Borough Council’s leisure and wellbeing spokesman, said: “The social history and archaeological collections at Rugby Art Gallery and Museum house a treasure trove of objects spanning hundreds of years, each shining a light on a chapter from the borough’s history.

“This new exhibition features an eclectic collection of items, ranging from a ring dating back to the Middle Ages to an issue of Melody Maker from 1988, all revealing fascinating tales about Rugby and its residents.”

Visit www.ragm.co.uk for more information about exhibitions and events at Rugby Art Gallery and Museum.