Joy and celebration at the inaugural Coventry and Warwickshire Foodie Awards

THERE was an appetite for awards last Thursday at the first ever Coventry and Warwickshire Foodie Awards.

The event to celebrate the area’s best hospitality businesses was held thanks to a partnership between Warwickshire County Council, Coventry BID and Visit Coventry.

More than 40 businesses were vying for success across 15 food and drink categories, each judged by a high profile panel.

It was made up of Celebrity chef Glynn Purnell, his former boss Andreas Antona who owns The Cross in Kenilworth, Russell Allen, the managing director of award-winning butcher Aubrey Allen, investor and speaker John Stapleton, and ‘The Fat Foodie’ influencer Chris Hardy.

Two of the headline winners were The Barn Kitchen, formerly of Binley Woods, named Foodie Champion, and Coventry’s Dhillon’s Brewery which scooped three awards – Artisan Drink Producer of the Year, Pub/Bar of the Year and The Godiva Award. 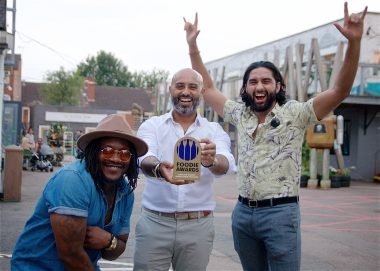 The brewery is based by the CBS Arena and took its first city centre unit during lockdown in early 2021 before opening in the Christchurch Spire, one of Coventry’s three iconic Spires, and have since gone from strength to strength.

Reacting to a successful night for Dhillon’s Brewery, Trish Willetts, Director of Coventry BID and award sponsor, said: “During the same time the team turned their brewery into a hand sanitising manufacturing unit to help with the battle of the virus supplying city centre businesses.

“Now they are embarking on their second bar which will be the Coventry City Tavern, a sports bar due to open on the outskirts of the city centre in August, with sponsorship from Coventry’s very own football team.

“They hit adversity in the eyes and kept on, keeping on!”

The Barn Kitchen in Leamington won the Foodie Champion Award. Kelly Iles and her team cooked more than 96,000 meals for frontline NHS workers over 100 days as well as sweet treats later on in the pandemic. Kelly, who now runs The Enchanted Tea Room in Leamington, dedicated the award to her late father who succumbed to Covid in January this year. 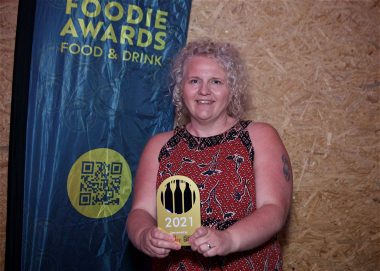 She said: “We were delighted to win this award after the most challenging 18 months in hospitality, but we felt that the need to step up to the plate was greater than that to save our business so our small deed to feed the NHS soon became a mammoth project.

“The frontline staff are the real heroes and we would like to dedicate our award to them as well as my Dad Ricky Perkins who would have been so proud to see us win.”

The Covid Resilience Award went to Sara Young and Sasha Burke – the mother and daughter team behind Hooray’s British Gelato Kitchen in Stratford-upon-Avon. 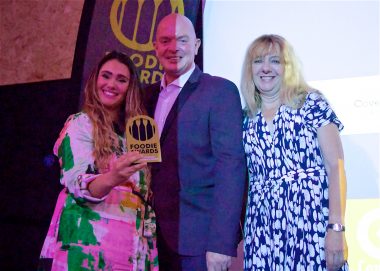 Sara said they were thrilled to be recognised after an extremely difficult year.

“Like all small business owners at the beginning of the pandemic, the knowledge that there was no way we could service our debts or meet the financial commitments of our business, not to mention pay our staff or ourselves in the coming weeks, let alone months, was sickening.

“During the past 18 months we have had to diversify and adapt our business, as have many other hospitality venues. Being forced to develop a new way forward will hopefully not only mean the continuation but the growth of our business.”

Warwick Street Kitchen in Leamington was named Café/Coffee Shop of the Year and the Best Newcomer Award (sponsored by CWLEP) was handed to Pasta Brothers, Bishops Tachbrook. 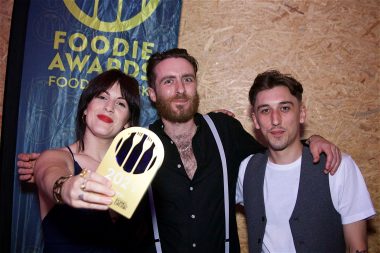 Warwick Street Kitchen owner Lydia Papaphilippopoulos-Snape, said: “The Foodie Awards was a much-needed celebration of the local hospitality industry so to be honoured with the win means a lot to us.

“The entire WSK team is super chuffed and humbled to be able to bring the award home – here’s to another year of serving our amazing community.”

Teenager George Carter from Bishops Tachbrook established Pasta Brothers at the start of the first lockdown after his GCSEs were cancelled. 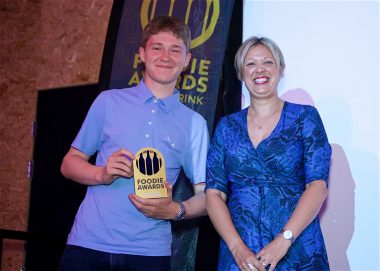 Collecting the Best Newcomer Award, he said: “I was so bored and demotivated that I decided to combine my love for cooking Italian food with my desire to make money and I started Pasta Brothers in May 2020.

“What began as a hobby selling to family and friends grew quickly to the business it is today.

“There are some incredibly talented people in Coventry and Warwickshire and it was an honour to be among them all at FarGo Village during the awards on Thursday evening.”

Price’s Spices in Leamington scooped two awards for Artisan Food Producer of the Year and Express to Success (joint winner with Swirls Gelato, of Leamington). 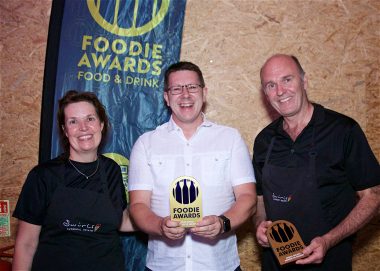 Owner Michael Price said: “These awards acknowledge the hard work that goes into making the products and running the business.

“Being part of the Foodie Awards shows the strength and diversity of independent food businesses in Coventry and Warwickshire and how well supported they are by people in the region.

“By also winning the ‘Express to Success’ award this gives us great confidence that our product range is ready for a wider audience.”

Independent Business of the Year was awarded to Proof Bakery in Coventry and the city’s Stripclub Streetfood claimed the headlines in the Best Streetfood category.

There was more success for Leamington businesses when Hilltop Farm Shop and Cafe won Farm Shop of the Year and Jessica Mooney collected the Food or Drink Experience Award for her artisan breadmaking school Bread for Life.

“It’s been a really tough time for everyone over the past 18 months and our Farm Shop has really thrived as people have chosen to shop local and take a greater interest in where their food comes from, so we have loved being able to reach more people and reduce food miles for many.”

But it was a Coventry business that beat off strong opposition to claim the prestigious Restaurant of the Year award, marking a double decade milestone for Turmeric Gold in Spon Street. 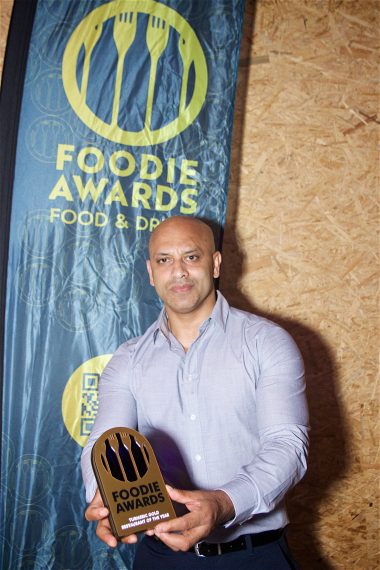 Owner Jay Alam said: “We are absolutely thrilled – it’s a tremendous accolade which is all the more meaningful as we are this year celebrating our 20th year in business.

“We have always taken pride in not only delivering the highest quality of service, but having the ability to evolve to ensure we meet the ever-changing needs of our customers, but never losing sight of our commitment to providing the ultimate dining experience.”

Jay was also a finalist in the Chef/Cook of the Year category, eventually won by Tobias Reutt who runs Earlsdon Supper Club.

The all-new Coventry and Warwickshire Foodie Awards are the result of 18 months of planning for the committee, a partnership between Talk Business UK, Coventry BID, Visit Coventry, Eat With Ellen and Chalmers News PR.

Jonathan Smith, of Talk Business UK, spoke of relief and inspiration that the awards could finally take place.

“It’s fair to say that, after a series of postponements, at times we had our doubts about whether it could even happen, but all the organisers felt strongly that it would be a much-needed boost to the industry as it emerged from a very difficult time, so we were determined to adapt and push on.”

He thanked the sponsors who made the event possible.

Coun Jim O’Boyle, cabinet member for tourism at Coventry City Council said, “I was delighted to see so many businesses represented at the awards – they did our thriving food and drink sector proud.

“They gave a real boost to the hospitality sector in Coventry and Warwickshire and at just the right time.

“It’s been a tough year, but the awards ceremony reminded us that there’s great food and drink in our high street names, our independents and our new businesses.”

The event, hosted at The Box at Coventry’s FarGo Village, also raised more than £1,000 for The Trussell Trust’s network of eight foodbanks in Coventry and Warwickshire. 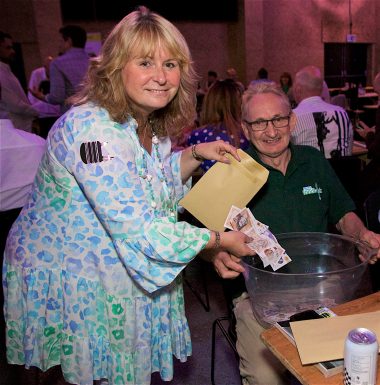 Samantha Stapley, chief operating officer at the Trussell Trust, said: “The support of the Foodie Awards will help food banks within our network continue to provide the lifeline of emergency support for local people in crisis, while we work in the long term to build a hunger-free future.

“As the pandemic continues, more people are likely to need a food bank’s help. Food bank teams are working tirelessly to ensure help continues to be available.”

Visit foodieawards.co.uk for more on the opening date for entries for next year’s competition.