A YOUNG fund-raiser and a dedicated volunteer, both from Rugby, have been shortlisted for awards by The Air Ambulance Service (TAAS).

Kloe Johnson, 12, has been nominated for the charity’s Big Impact award, while Janet Hurrell is up for the Volunteer of the Year award – both of which will be announced at the charity’s annual Showcase and Awards evening on Friday (September 17).

TAAS – which operates the Warwickshire and Northamptonshire, Derbyshire Leicestershire and Rutland, and national Children’s Air Ambulances – will host its inaugural gala award evening to celebrate and showcase the work of its people and partners.

The Big Impact award, the top award TAAS can give, is awarded to someone who has made an enormous impact on the charity, incorporating its values of Courage, Creativity and Compassion – and the charity says Kloe Johnson has done exactly that.

Kloe began fundraising when she was just seven years old, and by the time she was nine she had already raised thousands of pounds through her school and friends.

At nine years old, Kloe – along with her best friend Anna – wanted to form a children’s fundraising club. With their determination and passion, the two of them formed the club #TheCrew and soon began recruiting more members.

#TheCrew now has over 1,600 members, with children all over the UK raising vital funds for the lifesaving Children’s Air Ambulance charity, all via the club.

Kloe was shortlisted with Anna, along with four other impactful people, by an independent panel of judges, all distinguished leaders in their field.

TAAS CEO Andy Williamson said: “I’d like to take this opportunity to congratulate Kloe on making such a big and everlasting impact on our charity, and to thank her for the incredible input she’s had from such an early age. Kloe thoroughly deserves being shortlisted for this award.”

Janet was nominated for the Volunteer of the Year award, along with three other volunteers, for ‘going above and beyond’ for the charity. 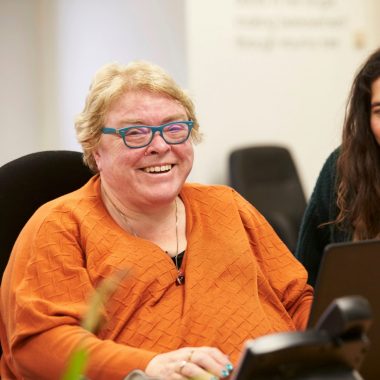 Janet Hurrell is up for the Volunteer of the Year award.

Janet has been a committed volunteer with TAAS since January 2017, when she joined the Supporter Care team at the charity’s Rugby HQ.

For over two and a half years, she has provided customer service to hundreds of TAAS supporters, ranging from researching volunteer recruitment opportunities and arranging meetings for potential new volunteers, to proofreading new policies and procedures.

Particularly over the past year, Janet has been a great support with the recruitment of new volunteers. Her HR background has helped when the charity set up its new volunteering system and practising training delivery before launching it to the wider charity, including over 1,000 volunteers.

She was also one of the first to ask if she could return to volunteer in the office when Covid restrictions were lifted.

Mr Williamson said: “I’d like to take this opportunity to thank Janet for her continued support for our charity, and to congratulate her on her thoroughly deserved shortlisting for this award.”

He added: “This is no ordinary industry awards event, here you will see first-hand how lives are saved, how families are kept together, how individuals go above and beyond the norm and how this charity makes a huge impact on our society. This night will be celebrating Courage, Creativity and Compassion and the true spirit of human endeavour.

“Everyone on the front line is a hero, especially through the pandemic. But there are also many more heroes behind the scenes, like Kloe and Janet, that make all of this happen. On Friday we celebrate them all as we begin The Air Ambulance Service Showcase and Awards.”

Held at the Vox in Birmingham on Friday (September 17), the awards evening will be hosted by Jamie Laing and Shirley Ballas and will recognise charity heroes across 15 different categories.