AN ‘EMOTIONAL’ Rugby mum who was inspired to help others after a family tragedy has led the Birmingham 2022 Queen’s Baton Relay into the town.

Charlotte Jolliffe – who founded bereavement support charity Freddie’s Wish in the name of her 13-month-old son after he died in a car crash in 2014 – led the relay through Caldecott Park in front of a cheering crowd of hundreds on Thursday (July 21).

An overwhelmed Charlotte spoke to The Observer just after her leg of the relay, which marks the build-up to the Birmingham 2022 Commonwealth Games. 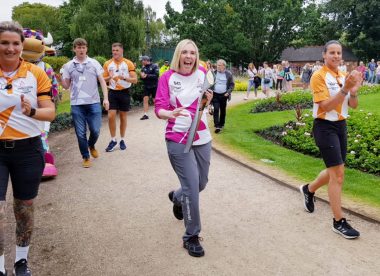 Charlotte said: “It was a very proud moment – I’ve never smiled for so long!”

She said: “It was amazing. It was so emotional. I can’t believe how many people are here!

“It was really lovely to think of Freddie and all the other bereaved families who we’ve supported over the years, and what we’ve done with the charity.

“It was a very proud moment – I’ve never smiled for so long! It was really special.

“I was nominated by my dad. I didn’t know about it until the email came through, and I thought it wasn’t real! I couldn’t believe it.

“I was really touched and humbled.”

Charlotte was chosen as a community batonbearer for being an inspirational figure who makes a difference to Warwickshire.

She founded Freddie’s Wish to help bereaved parents after she was unable to find specialist support in the weeks after Freddie’s accident.

The charity has so far raised over £150,000 to support bereaved families across Warwickshire, funded the training of more than 1,500 people in paediatric first aid, trained 50 schools across the county in bereavement support, and created a support service.

Charlotte won a Pride of Rugby Award in 2018, and the Prime Minister’s daily Points of Light award in 2020.

The Queen’s Baton Relay arrived in town just a week before the opening ceremony of the tournament, having started its tour of the Commonwealth’s 72 nations and territories at Buckingham Palace last October.

The relay arrived in Caldecott Park during a Festival of Sport organised by Rugby Borough Council, where crowds gathered to sample a range of sports, enjoy live music, and meet Perry, the official mascot of the 2022 Commonwealth Games, shortly before the relay began.

It was then carried through the town centre to a private event at Rugby School.