A DEATH-defying biker will “put his life in danger to save somebody else’s” when he becomes one of the few people allowed to attempt a world-famous stunt – the star attraction of this year’s Rugby Bikefest.

Paul Malin will take on The Original Wall of Death to raise £6,000 for charities including Prostate Cancer UK – a cause which has been close to his heart since he recovered from the disease in 2018.

The Wall of Death, which has been touring since the 1920s, sees bikers ride around inside a 32ft wide 16ft high cylindrical wall while spectators look down from above.

Paul, who has been involved in motorsport since he was five years old, says he is looking forward to the challenge – having ‘never done anything this stupid before!’

He told The Observer: “Anybody can jump out of a plane. I wanted to do something different, and it’s more of a challenge.

“There is much more risk to this. It could get quite serious – if it goes wrong, it’ll go wrong big style. It will hurt!

“But I’m looking forward to it, and I’m quite confident I can do it.” 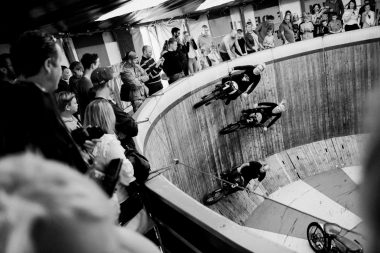 The Original Wall of Death will be the star attraction at this year’s Rugby Bikefest.

Paul, who is vice chairman of the Bikefest committee, says he feels privileged to have the rare chance to ride the wall.

“They hardly ever train anyone to do it,” he said, “and I’ve never heard of anyone ever doing it for charity. I don’t know how I got away with it.”

He has already begun four months of training with some of the best stuntpeople in the business – although he has not yet been allowed on the wall itself.

“The biggest problem is dizziness. If you get dizzy, you don’t know where you’re going, and then there’s only one way to go – down.

“So far I’m just going round and round the floor in circles. I managed three laps the first time, and I didn’t have a clue where I was.

“So I have to try and ride through that first.”

Paul will also raise money for Warwickshire and Solihull Blood Bikes, Pawprints, and Positive Bones – but Prostate Cancer UK is the cause which means the most to him.

He wants to put something back into the system which saved his life, and has even invited the surgeon who removed his tumour to the event as guest of honour – “so if something goes wrong at least he can operate on me!”

He says he wants to help spread awareness of the disease. “I hadn’t got a clue there was anything wrong with me,” he said. “I just went for a routine blood test.

“If I can put my life in danger to save somebody else’s, then that means a great deal.”

To sponsor Paul, message him via the Rugby Bikefest Facebook page.

Rugby Bikefest takes place on Sunday May 17. Visit www.therugbytown.co.uk/homepage/10019/rugby_bikefest to register for the opening Ride-In.