RUGBY Town have been handed a trip to Belper United in the first round of the FA Vase.

Edwin Ahenkorah’s second-half penalty was enough to seal a 1-0 win for Valley against AFC Wulfrunians on Saturday at Butlin Road and they will ow head to United Counties League Division One side Belper on Sunday October 25.

Last weekend, Ahenkorah settled the tie against Midlands Premier side Wulfs as part of an improved second-half performance from the hosts, after a relatively dreary opening period had seen both sides fail to make much of an impact.

Town boss Carl Adams shuffled his pack a little from the midweek league defeat at Hinckley, with Lee Thomas, Justin Marsden and Danico Johnson back into the starting line-up and there was also a full debut for Owen Bennett in the heart of the Valley defence.

Wulfs started brightly when James Hill put one just over the bar from twenty yards after six minutes before Lamar Parkes’s low free-kick was then turned around the post by visitors’ keeper Tom Haywood.

Though the home side went on to hold the upper hand in terms of possession, they once more looked lacking in the final third. 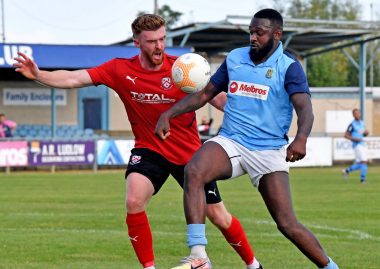 Instead it was Wulfs that carved out the best chance of the remainder of the half, with Ash Bodycote pulling off a decent save to another strike by Hill, after he had skipped past a couple of Rugby defenders.

The game’s decisive moment came with the new period just five minutes old, when Ahenkorah was fouled in the penalty box and the Valley striker picked himself up to stroke the spot-kick home.

Town pressed immediately for a second, with Parkes having two shots within quick succession.

His first effort from a tight angle was just kept out by Haywood and his subsequent strike from the edge of the area sailed over the bar. 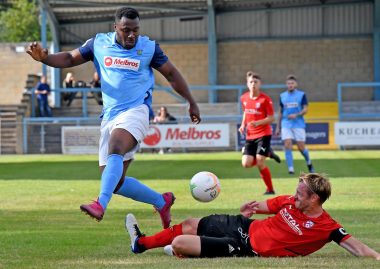 Valley sub Jordan Hayward was then denied a shooting opportunity by a well-timed saving tackle, before Robert Nanna blazed over for the visitors from distance in a rare threatening moment from them.

Johnson missed out on a good opportunity when through on goal, with Marsden seeing his effort tipped over the bar by Haywood and Dylan Parker and David Kolodynski threatened late on.

Rugby are back in action tonight when they head to leaders Harborough Town in the UCL Premier Division South.