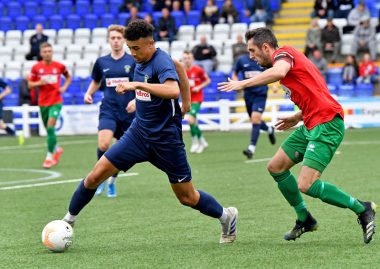 Josh Thomas had his blushes spared after conceding a first-half penalty that was not punished. Picture by Martin Pulley.

LLOYD Buckby’s goal on the hour mark was enough for Wellingborough Town to down Rugby Town by a 1-0 scoreline and hand Carl Adams’ side back-to-back defeats for the first time this season.

Five days after their 3-1 reverse at Coventry United, Valley came unstuck against the Doughboys as the hosts’ midfielder headed past Ben Newey to decide the below-par United Counties League Premier Division South contest.

It was an afternoon which could have gone down another path entirely, had the hosts fired home a penalty from the spot after Rugby’s Josh Thomas committed a foul just before the break.

Town had failed to find their feet and survived a number of other close shaves before that let off in the opening half, but were unable to improve their standing after the interval prior to finally going behind.

There will ultimately have been few complaints about the manner of the defeat by Adams in his full-time team talk, who must now rally his troops ahead of a trip to Coventry Copsewood in the first qualifying round of the FA Vase.

Darren Dickson’s Copses occupy 15th place in Midland League Division One at present after two wins and seven defeats in their opening nine games this term, a record that Town will hope to draw some confidence from.

Valley have dropped to fifth as far as their own league ambitions are concerned, and host Cogenhoe United next Tuesday after their Vase outing.