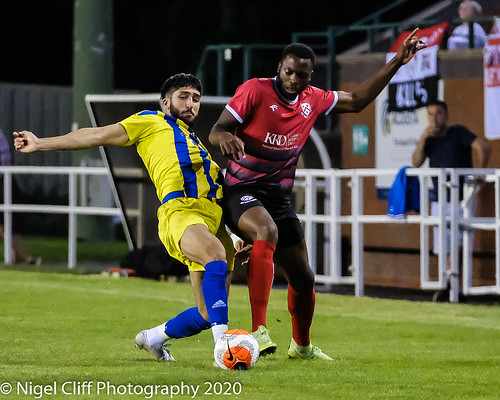 After a header goalwards was tipped into the air by the Wulfs’ goalkeeper, a home defender flicked the ball on but only into the path of Smith, who stabbed home what was a 13th-minute winner.

It keeps Sphinx unbeaten across all competitions, having navigated both of their FA Cup preliminary round ties with 4-3 penalty shoot-out victories after 0-0 stalemates.

Their latest on Saturday took them past Coleshill Town, setting up a first qualifying round meeting with Ilkeston Town on Tuesday, September 22.

Before then is a FA Vase qualifying round clash with Worcester Raiders of the West Midlands (Regional) League at Sphinx Drive on Saturday, which kicks off at 3pm.

THERE was disappointment for fellow Midland League Premier League side Coventry United however, who had to withdraw from the FA Cup after positive COVID-19 tests among the playing and coaching staff.

The Red and Greens were due to do battle at Evesham United last weekend, but with a self-isolation period of two weeks now in place, United were forced into taking the decision to withdraw from this year’s competition.

As a result, this weekend’s league meeting with Long Eaton United has been postponed, with the earliest return to action being on Saturday, September 26 – when Tividale visit Butts Park Arena.

TWO late goals ended any hope of a comeback for GNP Sports in their 3-0 drubbing by Division One leaders Leicester Road on Wednesday night.

The G’s have now suffered three defeats on the bounce since their opening day win at Uttoxeter Town, with a Matt Langham penalty just before the break setting the visitors up for another three points.

With a number of chances spurned, Road finally made the win safe when Simon Alcott finished from a Sam Munton cross, followed by Jake Brown’s clincher in the 90th minute.

The loss leaves GNP 15th in the league standings, a position they hope to rectify when meeting the basement boys Coventry Copsewood on Tuesday (7.45pm) at Allard Way.

Copsewood were also beaten by Leicester Road in their latest contest, albeit by a more comprehensive 6-0 scoreline on Saturday.

The hosts wasted little time to get up and running at De Montfort Park, taking just five minutes to open the scoring through Liam Read – who doubled the lead ten minutes later.

Further goals from Langham on 37 minutes and Read’s hat-trick goal a minute before half-time then put The Knitters in full control.

Alcott nipped the ball past Copsewood custodian Dale O’Donnell to make it five with 17 minutes remaining, who was then beaten by Dominic Brennan’s 80th-minute penalty to compound defeat.

ALCESTER Town were put to the sword by imperious Coventry Alvis in a stunning 6-1 showing in Division Two.

Aaron Dicken’s second-half double led the way for Jamie Burkacki’s side, lifting them to sixth in the standings.

And what a half it was, with Chanda Mulenga extending the lead five minutes in after good work from Mitchell Boe and Cairns to pick out their teammate.

While Billy Fagg pulled one back shortly after, the rout continued when Dickens scored his first with 20 minutes to play, picking out the far corner with aplomb.

Substitute Alex Andrews played a role in setting up Dickens’ second 11 minutes later, prior to Adam Bourn’s effort to top things off.

Next up is a meeting with Redditch Borough at Green Lane on Saturday (3pm).

DIVISION Three leaders Coventrians came from two goals down to win a 3-2 thriller against nine-man FC Shush to continue their perfect start to the season.

Jordan Perrins’ 26th-minute opener and a 33rd-minute penalty from Nicky Chubb gave Shush a big advantage heading into the break, or so they thought as Lewis Chester tucked home from a corner to give the visitors a lifeline at The Glades.

A quickfire double in the space of five minutes then turned the match completely on its head.

Substitute Joel Heeley levelled things up with a mazy run through to goal and finish, followed by Luke Wilson’s match-winner with 20 minutes remaining.

On Saturday, Welland are the visitors when Coventrians bid to make it three wins from three (3pm).

Luke Steer’s seventh-minute goal decided the contest at Vale Stadium, as Sporting’s 1-0 win ensured they maintained a 100% record from their two opening fixtures with none conceded.

Leamington Hibernian, who are winless from their two league fixtures to date, will attempt to put a dent in that record when visiting Gypsy Lane on Saturday (3pm).