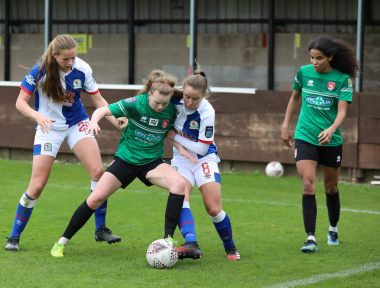 Phoebe Warner runs down the clock in the corner, shortly before United sealed their survival. Picture by Jeff Bennett.

With just two games of the season remaining, the Red and Greens have climbed five points above rivals London Bees – who have one less game to play – to confirm their second-tier status for 2021/22.

While United were forced to hang on dear to their priceless 38th-minute breakthrough, Merrick felt the win was a just reward for the visitors’ resilience.

“I think the girls really deserved it, we didn’t necessarily make it easy for ourselves but the girls are buzzing now that we’re mathematically safe,” said the 25-year-old.

“In the first half particularly, we had the beating of their back line, we looked in control and maybe we were unlucky not to have had another goal.

“Second half we’ve tried to sit in a little bit more to grind out the three points, everybody put in a shift and I was really proud of everyone on the pitch.

“There was one save where Sue got me out of a mess, it was a world-class save.

“She’s like that week in, week out and doesn’t get the plaudits she deserves – but I’ll stand by the fact that she’s the best goalkeeper in the league.

“She’s outstanding for us and gets us out of those moments all of the time.

And there were special words for the contribution of Davies, who got off the mark for the club for the first time since her February switch.

“Once you get one [goal], more will come, and maybe it’s a shame that we’ve only got a couple more games to close out the season,” Merrick added.

“But it’s something that she deserves, it’s a first Championship goal for her and she should be proud of that, it’s a great moment for her and for us as a club.”