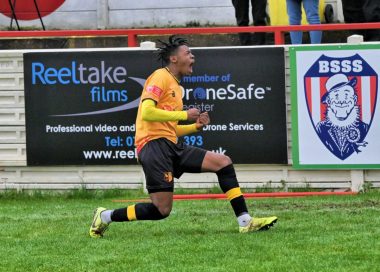 LEAMINGTON have wasted little time in strengthening their attacking options in the wake of Sam Osborne’s departure, signing Tyrell Hamilton from Alvechurch on a dual-registration deal.

The 21-year-old forward has been lacking competitive minutes on the pitch, with Church’s Southern League Premier Central campaign hampered by two national lockdowns and tier restrictions which have prevented any fixtures from taking place since October 31, but has now been handed salvation by the Warwickshire club.

Having been in training with the Brakes in recent weeks, the decision was made by manager Paul Holleran to bring in the striker to bolster his forward line, having lost attacking midfielder Osborne to National League North rivals AFC Fylde last week.

Hamilton can name AFC Bournemouth amongst his previous employers on his impressive CV, and will be in contention to feature in tonight’s trip to Chorley.