Coventry's Angliss eager to make the step-up for Century Motorsport 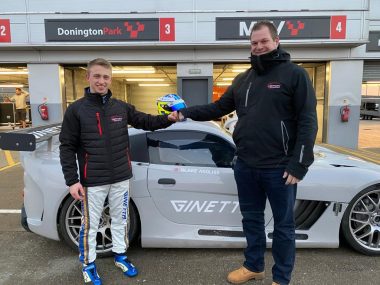 COVENTRY’S Blake Angliss believes a step-up in quality will only benefit his career in the long-term – after switching to Century Motorsport’s Ginetta GT4 SuperCup line-up.

The Fenny Compton-based outfit had initially placed the young prospect in their Ginetta GT Pro side for the forthcoming 2021 season, following a key grounding in karting as a junior driver, but have now decided to make a leap of faith in promoting the youngster higher up the ranks.

And while there will now be more pressure on the 17-year-old’s shoulders, having joined Andy Spencer and Henry Dawes in the SuperCup team, the path that lies ahead is one that the young gun is prepared to go down.

“With my limited previous experience in car racing, my focus this season is on making as much progress as a driver as possible,” said Angliss.

“To do this, I need to put myself against the most competitive field I can and that led to the decision to move classes.

“Arguably the most exciting part of this is getting the chance to race the full Ginetta G55 GT4 car.

“It’s a huge step up from the G40 I raced last year, but it’s the ideal car to learn GT racing in, so I’m lo