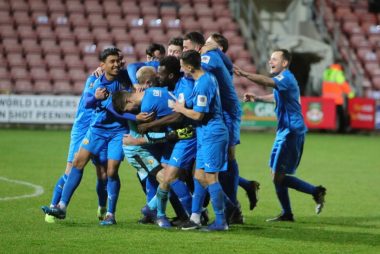 THE BRAKES face an all-National League North tie in the last 32 of the FA Trophy next month after being drawn to visit Kettering Town – days after the club’s emphatic penalty-shootout victory over Wrexham AFC.

Leamington caused a giant-killing in the third round of the competition last weekend, knocking out the National League’s Red Dragons 6-5 in the shootout at the Racecourse Ground, following a 0-0 draw in 90 minutes.

Considering the impressive nature of the headline victory, it is easy to lose sight of the club’s 11-game unbeaten run which was extended as a result, one which ranks as one of the best in Europe alongside the likes of Bayern Munich (also unbeaten in 11) and only bettered by clubs of the stature of Lyon, Juventus and AC Milan.

For manager Paul Holleran, it was the overall defensive efforts of his team – acting as a unit – that proved key in advancing to the next stage of the competition.

“I thought it was a very disciplined, organised performance,” he said.

“There weren’t many chances in the game, Kyle Morrison and Jack Lane performed superbly against their front two – who are a real handful – and kept them at bay.

“As much as I’m praising Kyle and Jack, the whole of the back four and Josh Martin and Steph Morley too, had to be big, strong and disciplined against their attack – they did that really well.

“There were some big performances, and then in the penalty shootout you have to say Jake Weaver was the hero.

“You could see the confidence in the boys, it didn’t phase them coming to play at Wrexham. There were lots of seven out of ten’s out there, Jake was superb in the shootout and we hit some really good penalties – even Kaiman’s [Anderson] that hit the bar.

“Each time you think these lads have hit their ceiling, they go another notch up – I cannot speak highly enough of them.”

With Leamington bidding to reach the last 16 of the Trophy when visiting Latimer Park on Saturday, January 16, the Brakes first bid to see out the year with two games in the space of two days – visiting Gloucester City AFC at New Meadow Park on Boxing Day, before hosting Hereford on Monday, December 28.

The task, quite literally, could not be much tougher for the Brakes heading to the table-topping Tigers in their next game, Paul Groves’ side losing just twice in 13 games this season and winning four of their seven home fixtures to date.

Holleran and Co. will no doubt be buoyed by their recent slaying of the Red Dragons heading into that encounter, knowing that a victory could push them into a healthy position in the play-off places and improve their already-impressive standing of eighth.