A ‘JOYOUS gathering’ in the town centre has marked the completion of the Rotary Club of Rugby’s project to upgrade a nature trail on a former railway line which runs through the town – and celebrated the club’s centenary in Rugby.

Members from all three of the town’s Rotary Clubs hosted the event to recognise the work of Rotarian Laurence Wilbraham and a team of dedicated volunteers who have spent the last four years sprucing up a three-quarter-mile section of the Great Central Walk.

The event also included the launch of the Rotary Reading Relay – part of International Children’s Book Day – a collaboration with over a dozen schools from across the borough which was themed on railways and the environment, in keeping with the Great Central Walk project.

Hunt’s Book shop and the Rotary Club of Rugby have joined forces to provide books for schools, and Rotarians have visited schools on a reading relay in which 2,500 children have taken part.

Music – much of it train-inspired – was provided by the Northlands School Djemba Drummers and the Riverside guitar group working with Warwickshire County Music, the Rugby Music Centre’s Folk Band, and several community choirs.

Prizes and certificates were also presented to Rotary Young Writers and Young Environmentalist winners by the Deputy Lord Lieutenant of Warwickshire, Eric Wood.

And Rugby’s Mayor Deepah Roberts spoke in appreciation of Rotary’s 100 years in the town.

A Rotary Club of Rugby spokeswoman said: “Rotarians said how delighted they are to work alongside the children and teachers who are coming so remarkably through the pandemic, and also paid wider tribute to the many workers and volunteers in Rugby who do so much to hold the community together, and whom Rotary is proud to help where it can.”

Rex Pogson, for the Rotary Centenary Committee, said: “It’s a delight that the Rotary Clubs in the town are celebrating the 100 years since the founding of the Rotary Club in Rugby first brought the Rotary motto of Service Above Self here.

“The culmination of a four-year project to improve the Great Central Walk has given us the themes for this informal celebration, and a celebration too of the thousands of young people and adults in the town who do so much, year after year, for the quality of our community life.

“Rotary is honoured to work with them in so many ways. This is a bit of fun to say thank you to them all.” 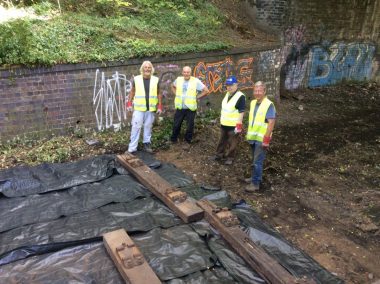 Rugby Rotary Club has been working with Rugby Borough Council and Warwickshire Wildlife Trust to upgrade the former railway line between Hillmorton Road and Abbey Street.

The Great Central Walk route ceased use as a railway in 1965 when Rugby Central Station was also demolished. Without the resources to manage it along its full length, the council handed over the lease to Warwickshire Wildlife Trust which now maintains the section south of Hillmorton Road – but the Trust doesn’t have the resources to manage the northern section.

Some volunteers were specially trained in strimming and hedge-laying for the project, which continued despite Covid lockdowns.

It also included the installation of three new bespoke benches, funded by The Rugby Group Benevolent Fund and designed by Cawston artist and former Rotarian Eric Gaskell. The back of the bench design incorporates trains, pedestrians and a cyclist as well as wildlife.

The project received the Rotary Club of Great Britain and Ireland Environmental Award last year, picked out as the winner from projects across the UK which fulfil sustainability criteria.