Gardening Time: What is Barakura style and how you can use it in your garden?

PLANT expert and podcaster Michael Perry, aka Mr Plant Geek, offers his guide to this creative look, inspired by his visits to Japan.

During his numerous visits to the Barakura English Garden in Japan, plant expert, blogger and podcaster Michael Perry, aka Mr Plant Geek, came across an imaginative style of container planting, which he hadn’t seen elsewhere on his travels.

“Barakura has become the art form for horticulture, and a way of flower arranging with plants, by breaking the rules a little bit,” says Perry, who offers advice on his website mrplantgeek.com and co-hosts The Plant Based Podcast (theplantbasedpodcast.net) with fellow gardening enthusiast Ellen Mary.

“It’s like flower arranging with living plants, but you create an instant effect through using a range of different plants which are planted close together, so the container looks good straight away,” he explains.

He has witnessed experts planting up containers the Barakura way on the five or six times he has been to the garden in Japan.

You can combine plants from many different groups – shrubs, perennials, grasses and more – and the idea is to have an instant wow factor by cramming them in and making the most of foliage, rather than just focusing on flower.

What plants are suitable for a Barakura-style container?

“Gardeners are very shy to plant anything in a container that isn’t an annual or a patio plant.

“It’s seldom you would see lupins or delphiniums in pots. People aren’t that inventive.

“Sure, shrubs become a bit more difficult in a pot, but you might use a shrub with some patio plants.

“It’s not going to be in there for years and you would need to reorganise it from time to time, but with Barakura style, you can do that.

“Something that can be used a lot in the autumn is the obedient plant Physostegia virginiana, which is really cool. In Japan, a lot of these plants are treated with a dwarfing agent to keep them small, but in the UK we don’t tend to do that with perennials, which you generally buy bigger.

The obedient plant gives you the blooms at its young stage.

“They also use celosia (cock’s comb), which is often an impulse purchase here. For the dressing, you could have rock plants, such as sedum with very delicate, detailed foliage on them.”

Other combinations might include dahlias or chrysanthemums with cosmos, ornamental grasses and ferns, whose foliage can knit the container planting together.

“The longevity is deceptively good. You’d assume because you are planting so closely that the plants are going to compete and aren’t going to last that long, but I’ve been amazed at the longevity of the pots.” 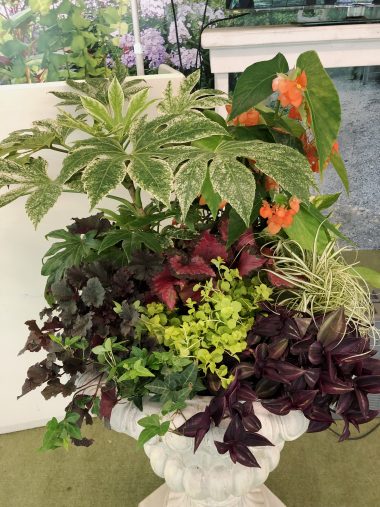 The pots can actually last for months, he says, although in some cases, you may have to swap plants which are past their best for healthier replacements.

“You can plant in pockets, and lift plants easily to replace them with other ones. You could even drop in plants in their pots – then it really would be flower arranging with real plants.

“If people are worried the roots will grow into each other, it could be done that way.

“Barakura-style containers may cost a little bit more, but it’s still possible to plant like that if you’ve grown from cuttings, or find good value plants.”

How could you give the Barakura treatment to autumn pots?

“Don’t just go for plants in the autumn-planting section of your garden centre.

“Look in the perennial section. There may be perennials which look good now for their foliage, such as hardy geraniums, or shrubs – such as young pittosporum or photinia, or you may want to go to the conifer section and have a mini conifer as your centrepiece.

“People need to understand that you won’t be planting this up for years to come, but rather for months to come. You’ll be breaking it down and re-assembling it, so that conifer is planted on into the garden, or you maybe replant around the conifer.”

Heathers and pansies could provide the colour to your Barakura-style pot, or later-blooming perennials, such as Japanese anemones and rudbeckia, he suggests.

You may be too late to blend indoor plants with outdoor favourites, but in the summer, you could make up some pots combining houseplants – such as spider plants and monstera – with outdoor plants.

“When you’re in the garden centre, bring all those plants together and have a look at how they combine. Make sure you have enough to fill gaps.

“Some of the students in Japan will roll the plant to make the root block more of an oblong shape, so it will fit differently in the container.

“You can absolutely do that. It means you could slide a plant into a gap or make it a crescent shape.

“It works with plants with multiple stems, like grasses.”

“Always invest in a good quality compost and pick on the types which have moisture-retentive properties and nutrients built in, but I’d also advise adding some slow-release fertiliser and moisture-retaining crystals.

“The Barakura-style container is going to be more competitive, because the plants are packed in, but if you have a good soil, you have a great chance of success.

“You need to keep watering – the rainfall won’t be enough.

“Have a saucer below, which will help.”

Reasons why equity release might be the best option for you